This weekend I had the pleasure of going to dinner in the French Quarter with some friends and two fabulous authors, Karen White and Susan Crandall.

Welllll, truth be told, I crashed the party.

A dear friend of mine belongs to a book club that was formed yeeeaaarrs ago, and she's mentioned it on occasion. (I'm still waiting

So, I told my dear friend that if they EVER had another get together with an author that I admire, could I pretty please tag along? Duly chastised, she agreed to let me know. Fast forward to now, the club chose The Time Between and arranged another get together with Karen while she was in New Orleans attending a book convention. And this time, I  coerced -- I  mean, I was invited! So thank you to the club for letting me join in the fun!

The dinner was actually a two-for-one club meeting. Besides the beautiful Karen White, we were treated to the company of Susan Crandall, author of the acclaimed novel Whistling Past the Graveyard.
The Time Between and Whistling Past the Graveyard go well together; they are both charming and poignant novels with rich southern settings and stories that will tug at your heartstrings. Highly recommended!

Here's a bit about each book: 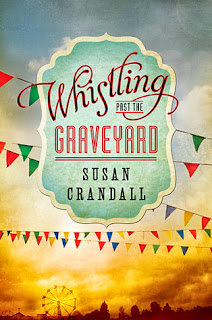 From an award-winning author comes a wise and tender coming-of-age story about a nine-year-old girl who runs away from her Mississippi home in 1963, befriends a lonely woman suffering loss and abuse, and embarks on a life-changing roadtrip. (from Goodreads) 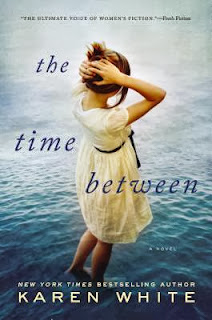 A stunning new novel of betrayal and forgiveness from the New York Times bestselling author.
Thirty-four-year-old Eleanor Murray is consumed with guilt for causing the accident that paralyzed her sister—and for falling in love with her sister’s husband. But when her boss offers her a part-time job caring for his elderly aunt, Helena, Eleanor accepts, hoping this good deed will help atone for her mistakes.
On the barrier island of Edisto, Eleanor bonds with Helena over their mutual love of music. Drawing the older woman out of her depression, Eleanor learns of her life in Hungary, with her sister, before and during World War II. She hears tales of passion and heartache, defiance and dangerous deception. And when the truth of Helena and her sister’s actions comes to light, Eleanor may finally allow herself to move past guilt and to embrace the song that lies deep in her heart… (from Goodreads) 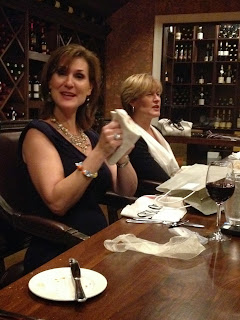 The lovely and funny Karen White opening a gift bag of goodies. 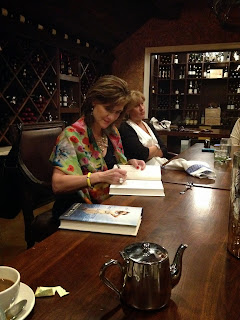 And passing around books and inscribing them. 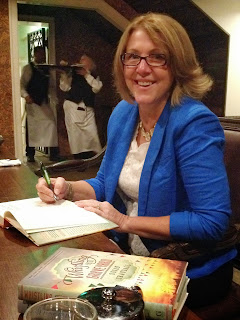 Lovely and gracious Susan Crandall signing her books (as the waiters in the background were bringing in platters loaded with delicious southern cuisine). 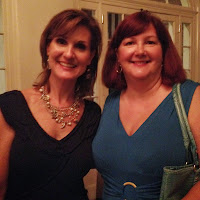 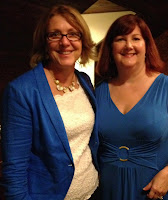 I'd like to mention that if you are a fan of Karen White, she said she has several books coming out in 2014 and that some of her long out-of-print first novels are getting an update and a fresh new look! Many good things to come from Karen, including a new Tradd Street mystery!

P.S. If you are ever in New Orleans, stop by the La Petit Theatre in the French Quarter and have dinner and cocktails at The Tableau....the peach margarita with mint was to die for!
Posted by Joanne at 12:29 PM 6 comments: