Being a Jane Austen Mystery Challenge 2011 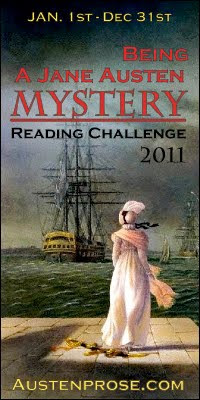 There's fun news for a completely unique challenge in 2011 over at the fabulous Austenprose! Laurel Ann has announced the details of the exciting "Being a Jane Austen Mystery Challenge 2011" featuring all of Stephanie Barron's Jane Austen mysteries! Besides reviews and contests on Austenprose, fellow Janeites can follow along with Stephanie Barron on her own website where she will discuss behind-the-scenes information about the writing and research involved in creating her Jane Austen sleuth. Sounds like a great challenge!

Time-line: The Being a Jane Austen Mystery Challenge runs January 1, through December 31, 2011.

For full details and to sign up for the challenge, please visit Austenprose.

Yay! So happy you're joining in this mystery challenge too! It's going to be so much fun!

This sounds like so much fun!! I've been wanting to read one of these. Now I have a reason to!!!

Glad you're coming aboard, Staci! What makes this challenge so interesting (to me) is the participation by Stephanie Barron with her readers! Looking forward to many good Regency mysteries ahead!