"Isabella of Castile is one of history's most famous and fascinating figures. She was the warrior who united a fractured country, and the visionary who sent Columbus to discover a New World. Revered by some as a devout leader who transformed Spain into a world power, Isabella is reviled by others as a fanatic who ushered in an era of persecution. In his evocative, vividly imagined new novel, The Queen's Vow, acclaimed historical author S. W. Gortner challenges the controversial myth surrounding Isabella, revealing the dangerous youth and dramatic early reign of the woman no one believed would be queen."
(from the publisher) 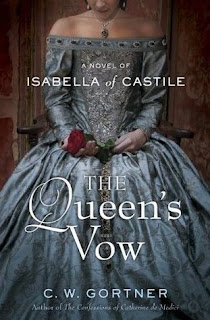 I always enjoy the opportunity to read and review historical fiction and experience a new author.  I have been reading positive reviews of Christopher Gortner's novels over the years and adding his books to my list of "to read," but I have to admit this was my first Gortner book. I'll have to make a better effort at getting to his backlist.

Whenever I explore an author's writing for the first time, I usually look for a few specific points:  Does the research and historical facts blend seamlessly with the fiction? Does the author create an authentic sense of time and place? Was I informed as much as I was entertained by the story? I think Gortner did an excellent job recreating the past and enjoyed his interesting portrait of the early years of  Isabella.

Told in the first person point-of-view, the author brought to life a young Isabella of Castile. Strong of character and conviction, she faced many challenges head on despite her youth.  Following the death of her father, Juan II, Isabella and her younger brother, Alfonso, were sent to live with their half brother, King Enrique and it is here that the stability and security of their world is turned upside down. Secret plots, lies, threats of treason, an ineffective King and a conniving and jealous Queen test Isabella's fortitude, but she is firmly rooted in the conviction that she is destined for greatness and does not flee from her problems and struggles. Deeply devout with a firm belief in the will of God, she is portrayed as an intelligent, forward-thinking young woman with a mind of her own. Despite others efforts to marry her for political gain, Isabella insisted that Fernando, prince of Aragon, was the only man for her. Later in life, as Isabella and Fernando are married and united in their duties, she juggled many roles as wife, mother, and queen. She was actively involved in strategic planning against Spain's aggressors and enemies, had a keen interest in advancing women's education, supported the arts and the idea of exploring new world routes, and of course, was devoted to the ideal of "one crown, one country, one faith."

Gortner does a good job of breathing life into an historical figure most known for her association with Christopher Columbus and her religious zeal which unfortunately resulted in discrimination and persecution of those who refused to convert to Catholicism ( the Spanish Inquisition). We see her as a strong and dedicated ruler, contrasted with the more human, frailer side.....a daughter concerned about an ailing mother, a wife struggling to work out personal problems with her husband, a mother dealing with the highs and lows of raising children, as well as wrestling with her own conscience as she made decisions which were, in her opinion, for the good of her subjects and country.

A very informative book and a keeper on my historical fiction shelf.

C. W. Gortner is the author of The Last Queen and Confessions of Catherine de Medici, as well as The Tudor Secret, a mystery novel set in Elizabethan England. He is currently working on his next historical novel about Lucrezia Borgia. To find out  more about the author and his work, please visit www.cwgortner.com.http://www.cwgortner.com/

***I received a copy of the novel from the publisher in exchange for a fair and honest review. Thanks to the publisher, the author, and Historical Fiction Virtual Book Tours for inviting me to participate in the virtual tour for The Queen's Vow.***

Lucky you! You have a couple of other fantastic reads by CW Gortner to discover!

This sounds so good!

This book is so so close to the top of my TBR stack. I just love Gortner's books -- you're in for a treat! :)

Thank you so much for your lovely review; I'm honored by your praise and delighted to be here as part of my virtual tour. I sincerely hope your readers enjoy THE QUEEN'S VOW.

Glad to read that you enjoyed this one, too, Joanne! You must read The Last Queen -- I think it's Gortner's best.

That's good news -- I downloaded a few titles to my kindle! :)

Just finished this one today and am now a fan of the author's writing!! Awesome review!