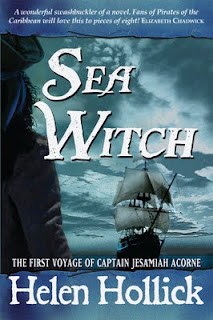 The Time: The golden age of piracy -- 1716
The Place: The pirate round - from Africa to the Caribbean

"At 15 Jesamiah Acorne escapes the bullying of his elder half-brother to become a pirate with only two loves -- the sea and his freedom. But his life is to change after an attack on a merchant ship off the coast of South Africa when he meets the mysterious Tiola Oldstagh, an insignificant girl -- or so he assumes -- until he discovers her true identity, that of a white witch. Tiola and Jesamiah become lovers, but the wealthy Stefan van Overstratten also wants Tiola as his wife. Meanwhile, Jesamiah's half-brother, Phillipe Mereno, is determined to seek revenge for resentments of the past.

When the call of the sea and an opportunity to commandeer a beautiful ship, the Sea Witch, is put in Jesamiah's path, he must choose between his life as a pirate or his love for Tiola. He wants both -- but Mereno and van Overstratten want him dead.

Tiola must use her gift of Craft to rescue her lover, but first she must brave the darkness of the ocean depths and cnfront the supernatural presence of Tethys, the goddess of the sea, who will stop at nothing to claim the soul of Jesamiah Acorne."
(from back cover)

What a glorious adventure with an irresistible rogue!

Sea Witch is the first book in the series chronicling the adventures of Captain Jesamiah Acorne, a pirate who loves the thrill of living-on-the-edge with dangerous encounters at sea...and sharing the plundered treasures with his loyal crew. On the surface, he's a handsome soundrel who loves his rum and women, but deep inside he suffers from shameful secrets and unspeakable abuse in his childhood from his jealous half-brother.

During a skirmish at sea with another ship, Jesamiah encounters the beautiful Tiola, a healer with the gift of Craft, a white witch. She is to haunt his mind and soul....and take over his heart with his love for her. But there is to be no peace for them as lovers as others reach out in pursuit....his brother Phillipe is not finished with his revenge, and Stefan van Overstratten wants Tiola for his wife. Most powerful of all, Tethys -- the soul of the sea in the dark abyss -- wants to claim Jesamiah as her own.

From a plantation in Charleston to Capetown and Nassau, the thrilling adventures and heartwrenching struggles of the two lovers was non-stop action and kept me glued to the pages. I adored this lovable rogue and his devoted Tiola and enjoyed the blending of history, nautical adventures, romance, and fantasy. There were moments of real anguish and heart-pounding danger, and a couple of times I laughed out loud at Jesamiah's naughty antics! Tiola was a strong and admirable heroine, devoted to upholding the truth and integrity of her craft and sensitive to the uses of her power.

I've already purchased the next two installments in the series, Pirate Code and Bring it Close, as I absolutely have to follow Jesamiah and Tiola on another adventure! Their journey is by no means complete in this first installment as there are still many conflicts to work through. I'm delighted to learn that Helen Hollick is busy working on the fourth novel, Ripples in the Sand. I'm hooked and will follow Jesamiah wherever the sea takes him!

***Thank you to Helen Hollick and Laura's Reviews for a copy of Sea Witch.****

I've been wanting to read this since I first heard about it! Reading your review is making me want to read this EVEN more. =D

I read another great review of this one. Sounds like a series I will have to read!

I've seen this set around but I haven't really focused on it. It looks really good per your review!

I liked this book very much - also sent by the author. It was so good. Glad you enjoyed it too.

Wow. I'm now looking forward to reading this one! Thanks for the review, Joanne.