House of Echoes by Barbara Erskine

"Joss Grant is eager to begin a new life when she inherits Belheddon Hall. She brings her busband, Luke, and their small son, Tom, to the dilapidated house, and sets about discovering her family roots which lie in the village.

But not long after they move in, Tom wakes screaming at night. Joss hears echoing voices and senses an invisible presence, watching her from the shadows. Are they spirits from the past? Or is she imagining them? As she learns with mounting horror of Belheddon's tragic and dramatic history, her fear grows very real, for she realizes that both her family and her own sanity are at the mercy of a violent and powerful energy which seems beyond anyone's control."
(from the publisher)

Whenever autumn rolls around and the weather turns cooler, I immediately get in the mood for some good old-fashioned mysteries and ghost stories. Throw in a little history or time slip into the mix, and I'm a happy camper. I enjoyed Erskine's Lady of Hay very much, so I set out to get as many books from her backlist as possible. House of Echoes sounded like an appropriately scary Halloween read, so I settled in and prepared myself to be spooked. I was not disappointed!

When Joss and her financially-strapped husband discover that she has inherited an ancient ancestral home from her birth mother, Belheddon Hall, it appears that it is the answer to their prayers. Joss is anxious to settle in and delve into the history of her new home to discover as much as she can about her birth family. It doesn't take long for her to locate cryptic journals and letters which hint at a malevolent spirit that has haunted and harmed the males in the family for generations. And the villagers, wary of the house, warn them of the family's tragic history in the house.

Dark, stormy nights......whispers from the shadows......white roses left on the bed pillow......laughter in the attic......a baby crib that moves from the wall to the window......a bone-chilling coldness that takes over a room.....hello! One night in that house and this would have been me: 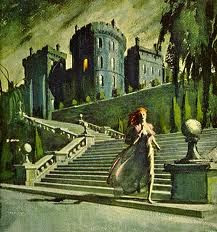 That's me, hightailing it outta there!!! But if they left the house, there wouldn't be a story, would there? So the family settles in with the help of her sister/nanny, and Joss, now pregnant, continues to be plagued with terrifying dreams and visions. Luke, ever the macho-realist, scoffs at the idea of ghosts and attributes the events on Joss's over-active imagination or the stress of her pregnancy. In his mind, everything has a logical explanation and Joss is over-reacting. Joss and her good friend, David, begin to research the history of the home and discover that it has a royal connection and a witch's curse which has cast a chilling terror in the inhabitants of Belheddon Hall since the fifteenth century. How can they deliver the house of this evil before it claims another victim?

Definitely an A+ for the creep factor, and if you can overlook a few minor annoying points (too many "There, there, dear, you're just overwrought" type comments and a sister that brings obtuse to a new level), it's a darn good spooky read. Had me looking over my shoulder a few times and turning on a few extra lights!

ooooooh. Mysterious. ^.^ When it gets chilly outside I find myself reading more fantasy books. Huh. Isn't that strange?

I think the cold weather is perfect for fantasy books, Carole Rae! I'm saving A Game of Thrones for winter reading as it just seems to me to be a good read for a cold, dreary day.

I've read most of Erskine's books, but for some unknown reason I always thought this one was a short story collection. Since I'm not much of a short story fan I've avoided it. Now that I realize I was totally wrong, I'm going to have to get myself a copy of this one and read it for myself!

Thanks for the review.

Yes, Melissa, she does have some short story collections, (Distant Voices, Encounter, and a few more) but this one was a novel. I have Child of the Phoenix, Kingdom of Shadows, and Midnight is a Lonely Place waiting.

Joanne, my favourites are Child of the Phoenix, Kingdom of Shadows and Lady of Hay. I can't wait to hear what you think of the first two! I also really enjoyed Whispers in the Sand and The Warrior's Princess.

Oh, good -- so many good reads to look forward to, Melissa! Thanks!

Adding it to my list right now!! Sounds wonderful to me!