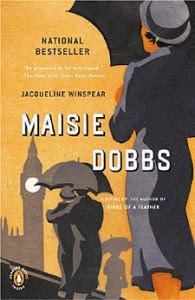 "The daughter of a struggling greengrocer, Maisie Dobbs was only thirteen when she was sent to work as a maid for wealthy London aristocrats. But being bright and thoughtful beyond her years, Maisie studies her way to Cambridge, then serves as a nurse on the Front during the Great War.

Now, it's the spring of 1929, nearly ten years after the Armistice and Maisie has just opened up her own detective agency. Her first assignment, a seemily open-and-shut case, will reveal a much deeper, darker mystery, forcing Maisie to revisit the horrors of the war and the ghost she left behind. Refreshing, absorbing, and beautifully rendered, Maisie Dobbs marks the beginning of an incredible new series."

I've had the Maisie Dobbs books on my TBR shelf for quite some time, so I was delighted to be invited to participate in the TLC tour and month-long celebration in March for this wonderful historical mystery series by Jacqueline Winspear.

I thought Book #1, Maisie Dobbs, was a beautifully written story from start to finish. It is a poignant account of a young girl's rise from household servant to wartime field nurse to eventually creating her own career as a private investigator during WWI-era England.

This novel is so much more than just an historical mystery with a clever female sleuth. Winspear creates Maisie's story of her first investigative case in such a way that with flashbacks we experience the horrors of war and come to understand the physical and psychological scars of those who served during wartime. So many made sacrifices of the body, mind and heart, including Maisie herself....which has given her a deep sense of purpose in life that goes beyond just wanting to solve mysteries. She has empathy for those who suffer or are in need, and this first installment of Maisie Dobbs will reveal the unusual and emotional path that has brought her from humble beginnings to professional investigator. A great beginning to a series that I can't wait to continue!

*****Thank you to Trish Collins @ TLC Book Tours and the publisher (Penguin Books) for providing me with a review copy of Maisie Dobbs.***** 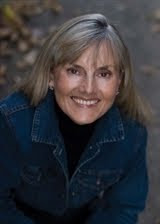 Be sure to participate in all the fun of Jacqueline Winspear's virtual TLC book tour during the month of March.

The entire Maisie Dobbs series will be read and discussed throughout the month of March! You can jump into this series wherever you like, but if you're following along you can catch reviews and discussions of each book in the series according to the following schedule:

To see the list of over thirty blogs that will be participating in the read-along, and to see which books will be reviewed by which bloggers, click here.
Enjoy!
Posted by Joanne at 12:15 AM

I have only read a couple of the books in this series so far, but I liked them both! Looking forward to reading more!

well I definitely have to read this book if you highly recommend it- so far all your recommendations are wonderful.

Great review! I really liked this book too, it is a wonderful series.

I haven't read anything in the series and must try to find this.

I have had this book for what feels like forever on my shelf...I will be reading it this year for sure. Loved your review!

I've heard only good things for this book...hmmmm....great review! :)

BTW, I'm hosting a giveaway over at my blog:
http://www.caroleraesramblings.com/2012/03/stop-drop-alexa-blog-hop-2-question-of.html

I can't believe I haven't read this series yet, especially since it reminds me so much of the Mary Russell books (which I love!).

I'm glad you enjoyed Maisie! Thanks for being on the tour.

Ooh glad to see you enjoyed it! I've had it in my tbr pile forever as well. Maybe now I'll make an effort to get to it soon. LOL