Spotlight on .....Overseas by Beatriz Williams 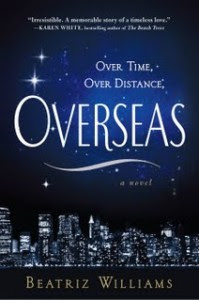 What's the buzz in my book world lately? I've had my eye on debut novel Overseas by Beatriz Williams.....billed as a romantic time-travel story,  this one has my name all over it.

Here's the book synopsis, and if it sounds interesting to you, author Lauren Willig has a Q&A with the Williams and a chance to win the novel. It will be released May 10, 2012. Book Synopsis from the author's website:

"Amiens, France, 1916: Captain Julian Ashford, a British officer in the trenches of the Western Front, is waylaid in the town square by Kate, a beautiful young American. Julian’s never seen her before, but she has information about the reconnaissance mission he’s about to embark on. Who is she, and why did she track him down in Amiens?

New York, 2007: A young Wall Street analyst, Kate Wilson learned to rely on logic and cynicism. So why does she fall so desperately in love with Julian Laurence, a handsome British billionaire with a mysterious past?

What she doesn't know is that he has been waiting for her... the enchanting woman who emerged from the shadows of the Great War to save his life."


I think this sounds wonderful.....timeless love.....past and present colliding.....I'm looking forward to it.
Posted by Joanne at 10:35 AM

This has caught my attention too. Normally, I think I prefer when people go back to the past rather than come to the future, but I am still prepared to try this one out to test that theory!

Sounds pretty good to me too!!

This does sound good. I'll have to keep my eyes open for it.