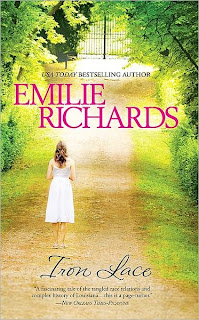 "When Aurore Gerritsen watched her lover kill her father, it was just one act of violence in a long chain of dramatic events.Years later, behind the iron lace gates of wealthy New Orleans, beneath the veneer of her society name, linger secrets that Aurore Gerritsen has hidden for a lifetime, and truths that threaten to change forever the lives of her unsuspecting family. Now, as Aurore faces her own mortality, she needs to reveal those secrets that have haunted her for so many years.
Aurore seeks out Phillip Benedict and asks him to tell her story. He's intrigued, but wonders why the matriarch of a prominent white family would choose to confess her sins to an outspoken black journalist.Finally Phillip agrees, but though he thinks he's ready for anything she might say, the truth is that nothing can prepare him for the impact of Aurore's shocking revelations."(from Goodreads)

Iron Lace is a gripping, heartbreaking story of a forbidden love from the past in Old Louisiana.

As the story begins in New Orleans in the racially turbulent 1960's, an ailing matriarch of an aristocratic family wishes to have her memoirs written, and her unusual choice for a journalist to write her life story will come as a surprise.  As Aurore begins recounting the memories of her life, old secrets unfold, tragedies and prejudices of the past are revealed, and the destruction of long-held hate and revenge play out across generations.  From the 1890's to the 1960's, Aurore's life story and the choices she made changed the course of many of her family's lives, and the revelation of these past secrets will have shocking repercussions.  It is a very emotional and intense read.
Great storytelling with spot-on historical accuracy wins high marks from me. The author captured the authentic colors, flavors, and essence of the history of southern Louisiana without being cliche.

My only minor quibble with the book is that there is not complete closure at the book's end...there are obvious loose threads that will be picked up in the sequel, Rising Tides, which I have already added to my kindle. I must find out more about the unforgettable characters in Iron Lace (a reference to the beautiful decorative ironwork on the balconies of southern mansions).


***A note about book covers: The cover pictured above is the new cover for the rereleased paperback version and the kindle edition. I'm not a fan of the cover as when I look at it, I think "women's fiction" or a contemporary romance.

The older covers do a better job of conveying an "old south" feel which is the heart of this story:

I like the cover from the hardback book. I love the whole sound of this one and the old south setting. This is an author that I haven't tried yet, but I surely will read something from her!!

Staci - I like your new avatar -- I had to check to see if you were the same Staci or a new one!