Guest Post - Jennie Fields, Author of The Age of Desire


Today, I am very pleased to welcome Jennie Fields to my book blog, the author of The Age of Desire. In this fascinating guest post, she reveals how an incredible discovery during the writing of her book about the great author, Edith Wharton, impacted the depth of her book. Enjoy!


Writing a biographical novel is not just about telling a life story, but about creating a world around the main character.  In the case of Edith Wharton, whose mid-life love affair with a younger man was the basis for my novel “The Age of Desire,” it was soon apparent to me that I needed to tell this tale not just through Edith’s eyes but also through a character who could view her from the outside.  I discovered there was a woman who was with Edith for more than thirty years, first as her childhood governess, then as her literary secretary and first reader.  Her name was Anna Bahlmann and Edith Wharton’s biographers all but ignored her.

But because they were together so long, I thought Edith and Anna must have been close.  With some research, I discovered Anna was rather remarkable: orphaned at the age of two, she nevertheless became a cultured, educated and self-supporting woman in an era where there were few options for what was considered the weaker sex.  After discovering all I could about her, I began to write.

Then about two months in, a miracle occurred. One night, I couldn’t sleep, so I got up and typed Anna Bahlmann’s name into a search engine as I had a thousand times before.  But that night, a new listing appeared.  Christies, that very week, was auctioning off 135 letters from Edith Wharton to Anna Bahlmann that had been stashed away for over a hundred years!

I called Christies as soon as they opened the next day and asked if they’d allow me to view the letters, as I was in the middle of writing a novel about these two women.  Much to my surprise, they said, “Of course.  Come in.  We’ll set you up at a table.”  For two days, I poured these wonderful letters, hands shaking.  This pile of sweet missives revealed an almost mother/daughter relationship.  Starting when Edith was a bright eyed, unbelievably articulate child, writing to governess Anna about books and writing and ideas, missing her when she went off to teach other children, begging her to visit them at their country house, to later letters when Edith counted on Anna to help run her affairs, admonished her for worrying too much over her, and laughed with her about things only they could share; their friendship was warm, touching and intimate.

In the end, “The Age of Desire” is not just about a mid-life love affair, but about an abiding friendship between two remarkable women.  And to my mind, that makes it a richer, more universal book.  How lucky I was that Anna Bahlmann came into Edith Wharton’s life, and into mine. Born in the heart of the heart of the country – Chicago — Jennie Fields decided to become a writer at the age of six and produced her first (365 page!) novel when she was eleven. She received her MFA at the Iowa Writers Workshop and published her first short stories while spending a postgraduate year at the Fine Arts Work Center in Provincetown. But needing to feed her family in the era just post-Mad Men, she became an early female copywriter at an advertising agency, soon rising to creative director and moving to New York. In her 32-year advertising career, she wrote and produced many well-known and award-winning commercials. People even now can embarrass her by telling her they grew up dancing to one of her McDonalds’ jingles.
Still, fiction was her great love. Writing during her lunch hour and after her daughter’s bedtime she penned her first novel, Lily Beach, which was published by Atheneum in 1993 to much acclaim. Since then, she’s written three more novels including Crossing Brooklyn Ferry and The Middle Ages. Her latest, The Age of Desire, is a biographical novel based on the life of the author dearest to her heart, Edith Wharton. An Editor’s Choice of the New York Times Book Review, it describes Wharton’s mid-life love affair with a younger, manipulative man. Why the affinity to Wharton? Because she wrote about people attempting to break society’s expectations for them – which is something Fields has been yearning to do all her life.
For more information, please visit Jennie’s website. 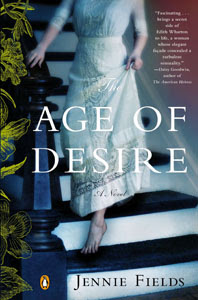 Labels: The Age of Desire