Elizabeth I by Margaret George 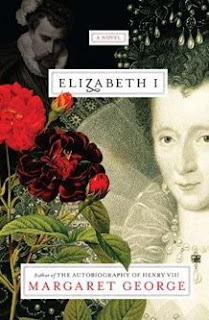 About the book, Elizabeth I

It is 1588, and the showdown between England and Spain has finally come. Elizabeth and her island kingdom stand alone against the strongest country in Europe. Yet after that triumph, she cannot rest. There are many other challenges to her, and the ever-hanging question of the succession to the childless queen. Surrounded by such larger-than-life characters as Drake, Shakespeare, the Earl of Essex, Raleigh, and Francis Bacon, the queen proves bigger than all of them.

Her cousin and rival, Lettice Knollys, mother of the Earl of Essex and widow of Robert Dudley, who was Elizabeth’s love and soul mate, provides a dark counterpoint to the glittering aura of Elizabeth’s legend. Bound together in a love-hate relationship, the two women pursue their linked destinies.

My thoughts on the novel, Elizabeth I

I was so pleased to be a part of the virtual tour for such a noteworthy author as Margaret George. I was already familiar with her work because of the popularity of her book, The Autobiography of Henry VIII, so I felt honored to be able to preview her latest historical fiction release, Elizabeth I.

Let's start with the amazing cover, shall we? With the much over-used "headless woman" covers lately, it was refreshing to see this elegant and classic design. Bravo!

Next, this novel is unique in that it does not retell the story of her life from its beginning, a story that most people familiar with the Tudor era already know; rather, the story opens in the year 1588 as the queen and her army are preparing for the attack from the Spanish Armada, and continues with the remaining fifteen years of her life.

Margaret George creates a powerful drama of the loves, passions, rivals, and power of Elizabeth I, including such figures as Drake, Raleigh, the Earl of Essex, Robert Dudley, Lettice Knollys, and Shakespeare (among others). Dramatic and rich with historical detail of the era, I was very impressed with this fascinating portrait of the Virgin Queen's final years of reign. Reading Elizabeth I has made me want to explore the other works of Margare George as well, and I can highly recommend Elizabeth I to all historical fiction enthusiasts and to all who enjoy a well-researched, richly told tale.

The whip cracked and snapped as it sought its victim.

I could see the groom cowering in the bushes, then crawling away in the underbrush as the whip ripped leaves off a branch just over his head. A stream of Spanish followed him, words to the effect that he was a worthless wretch. Then the face of the persecutor turned toward me, shining with his effort. “Your Majesty,” he said, “why do you keep my whip?”

I sat up in bed. I could still smell the leather of the whip, lingering in the air where it had cracked. And that smirk on the face of Mendoza, his teeth bared like yellowed carved ivory—I shuddered at its cold rictus.

It was only a dream. I shook my head to clear it. The Spanish were much on my mind, that was all. But . . . didn’t Mendoza actually leave me a whip? Or did we just find one in his rooms after he hurriedly left? I had it somewhere. It was smaller than the one in the dream, useful only for urging
horses, not punishing horse grooms. It had been black, and braided, and supple as a cat’s tail. Spain’s leather was renowned for its softness and strength. Perhaps that was why I had kept it.

It was not light out yet. Too early to arise. I would keep my own counsel here in bed. Doubtless devout Catholics—secretly here in England, openly in Europe—were already at early Mass. Some Protestants were most likely up and studying Scripture. But I, their reluctant figurehead, would commune with the Lord by myself.

I, Elizabeth Tudor, Queen of England for thirty years, had been cast by my birth into the role of defender of the Protestant faith. Spiteful people said, “Henry VIII broke with the pope and founded his own church only so he could get his way with Anne Boleyn.” My father had given them grounds with his flip quote “If the pope excommunicates me, I’ll declare him a heretic and do as I please.” Thus the King’s Conscience had become a joke. But out of it had come the necessity of embracing Protestantism, and from that had grown a national church that now had its own character, its own martyrs and theology. To the old Catholic Church, I was a bastard and usurper queen; thus I say that my birth imposed Protestantism upon me.

Why must England, a poor country, be stuck with subsidizing three others—the French, the Dutch, the Scots—and facing Spain, the Goliath champion of Catholicism? God’s teeth, wasn’t it enough for me to defend and manage my own realm? The role was a sponge that soaked up our resources and was driving us slowly but inexorably toward bankruptcy. To be the soldier of God was an expense I could have done without.

Soldier. God must be laughing, to have handed me his banner to carry, when all the world knew—or thought it did—that a woman could never lead troops into battle. 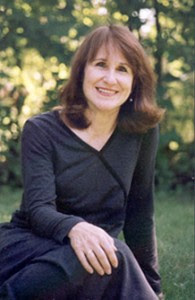 Margaret George is the author of six epic biographical novels, all New York Times bestsellers, featuring larger than life characters like Henry VIII and Cleopatra. Although painstakingly accurate historically, their real focus is the psychology of the characters. We know what they did, we want to know why. Her latest release is Elizabeth I.

Margaret’s research has taken her from the islands of Scotland to the temples of Upper Egypt, with experiences that include snake-keeping and gladiatorial training.

She lives in Wisconsin and Washington DC. Interests include reptile conservation efforts, Middle Eastern dance (aka bellydancing), and archeology.

For more information about the author and her books, you can visit Margaret George’s website at www.margaretgeorge.com.

I would like to thank Cheryl Malandrinos of Pump Up Your Book! for inviting me to take part in the Margaret George tour and The Penguin Group for providing me with an advance review copy of Elizabeth I by Margaret George.
Posted by Joanne at 7:14 AM

Thanks so much for having me on your site, and for reviewing ELIZABETH I. I think the last years of Elizabeth's life so often are ignored because people use up all their space on the childhood and early years, so I wanted to give it its due. I think it is actually the best time we have to study the queen's character.

Thanks for the wonderful review of Margaret's latest. I just finished it up as well. What a fascinating story. I'm glad you enjoyed it too.

It was my pleasure to read and review Elizabeth I, and wish you much success with this new novel!

I never get tired of reading just one more book about Elizabeth I. I do wish I will be able to get my hands on this copy.

Mystica -- I believe there are some giveaway opportunities with this blog tour. Please check the Pump Up Your Book website and the Margaret George website for a list of blogs with giveaways. Good luck!

I love Elizabeth I and this is one that will certainly go on my TBR list!! Excellent review!

Staci - If you love the legacy of Elizabeth I, then this is a must read! It's over 600 pages, but well worth the time. Enjoy!

Great review, Joanne. I've got this one waiting for me and am really looking forward to reading it.

Avid Reader - Knowing your love of great historical fiction, I am confident you will find this an amazing read.