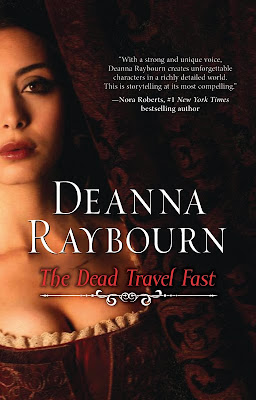 "With a modest inheritance and the three gowns that comprise her entire wardrobe, Theodora leaves Edinburgh--and a disappointed suitor--far behind. She is bound for Rumania, where tales of vampires are still whispered, to visit an old friend and write the book that will bring her true independence.

She arrives at a magnificent, decaying castle in the Carpathians, replete with eccentric inhabitants; the ailing dowager; the troubled steward; her own fearful friend, Cosmina. But all are outstripped in dark glamour by the castle's master, Count Andrei Dragulescu.

Bewildering and bewitching in equal measure, the brooding nobleman ingites Theodora's imagination and awakens passions in her that she can neither deny nor conceal. His allure is superlative, his dominion over the superstitious town, absolute--Theodora may simply be one more person under his sway.

Before her sojourn is ended--or her novel completed--Theodora will have encountered things as strange and terrible as they are seductive. For obsession can prove fatal...and she is in danger of falling prey to more than desire."
(from the publisher)

When it comes to The Dead Travel Fast, people may be asking, "What? Not another vampire story! Hasn't that topic been covered already ad nauseam?" While I've read my share of vampire tales (and plan to read many more!), I promise you Deanna Raybourn's newest gothic romance was a thrill to read and a refreshing take on the vampire lore.


With a crumbling Transylvanian castle in the Carpathian mountains and howling wolves as the background music of the night, this is Theodora's story, an aspiring novelist, who sets out to make her own way in the world after her grandfather's death. Opportunity arrives for Theodora as her childhood friend, Cosmina, requests her help as she prepares to marry in her home in Transylvania. Theodora is delighted to support her friend and soak in the myth and lore of her exotic surroundings, using her new experiences in the strange land as inspiration for her writing.

Upon her arrival, she is immediately captivated by a very unusual and sensual experience with the dark and striking Count Andrei, the very person to whom Cosmina is preparing to marry.

Make no mistake about it.....for those who have read The Lady Julia Gray/Brisbane series, Theodora and Andrei are unlike the elegantly restrained Lady Julia and Brisbane. The Count and Theodora are both very much aware of their strong, sensual attraction for each other, and as the story unfolds, she discovers that inhabitants of the castle have dark and sinister pasts....some may even have inherited the legacy of Count Bogdan, Andrei's father, known as the devil himself. Has Theodora become involved with a just a reckless rake, or is he even more dangerous and threatening...perhaps even a strigoi (vampire)? How will fear and superstition influence the way events are perceived?

In the midst of death, evil legends, and mistrust, Theodora must find a way to stay in control of her feelings and protect herself, while making some of the most heart-rending decisions of her life about those she has come to love, and about those she thought loved her.

Hands down, a gothic romance winner and highly recommended!!

Wonderful review! I have this sitting on my TBR pile - hope to get to it next week!

Sounds good! Around what year is it supposed to take place?

Hi, Ruth - Hope you enjoy it as much as I did; I think it's my fav book of hers.