The Winter Sea by Susanna Kearsley

"History has all but forgotten.....
In the spring of 1708, an invading Jacobite fleet of French and Scottish soldiers nearly succeeded in landing the exiled James Stewart in Scotland to reclaim his crown.

Now Carrie McClelland hopes to turn that story into her next bestselling novel. Settling herself in the shadow of Slains Castle, she creates a heroine named for one of her own ancestors and starts to write.

But when she discovers her novel is more fact than fiction, Carrie wonders if she might be dealing with ancestral memory, making her the only living person who knows the truth--the ultimate betrayal--that happened all those years ago, and that knowledge comes very close to destroying her...."
(from the publisher) 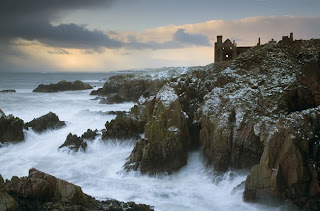 It's official: I have a new favorite book, and it is The Winter Sea!

Kearsley has the ability to make me forget that I am reading....I just fall into her stories and become part of another world. She makes you feel the damp, cold stones of the castle, shiver in the icy cold wind and water of the sea, and experience real heart-pounding fear as danger draws near. She brings you to tears as your heart truly aches for her characters and you understand the depths of their feelings.... it's just incredible! If you have room for just one more book on your TBR list, make it The Winter Sea!

The structure of this book makes the story read as a time slip story, but it's actually a "story within a story" -- in the present, author Carrie McClelland has arrived in Scotland to begin writing her new novel based on an historical event: an attempt by the Jacobites in the early 1700's to bring the exiled King James back to Scotland. Once she arrives in Cruden Bay, she feels compelled to rent a cottage near the sea where she can settle in to write. The cottage is near the ruins of Slains Castle, and she experiences a strange deja vu while exploring the castle. Carrie is inspired to begin writing immediately, and discovers as she writes (the reader actually gets to read the chapters Carrie is writing) that she has a "genetic memory" from the past. Strangely, as her novel begins to unfold, Carrie discovers evidence in her research that what she thought was her fictional account is actually recorded history. In parallel stories, as Carrie guides her novel's heroine in her love story, Carrie also finds herself attracted to a handsome history professor.

Carrie names her heroine after an ancestor; she creates Sophia , a beautiful young orphaned girl who comes to live at Slains Castle in the 1700's with her relative, the Countess of Erroll. There is much secret activity at the castle as the inhabitants prepare for the return of their exiled King from France. Sophia is intelligent and discreet, and meets many of the players in the secret plot, one of them the handsome John Morey, a Jacobite with a price on his head. As the plot begins to be put into motion, danger looms for all involved....and if it fails, it threatens to change the lives of the inhabitants of Slains Castle forever.


And there's great news on Susanna Kearsley's website....plans are underway to write a companion book for The Winter Sea continuing the story with Anna! Wonderful news! Click here for Kearlsey's news.

I've had this on my TBR list and intend to read it pretty soon, glad to know you loved it, it sounded good when I first heard of it!

Hi, Julie - I've enjoyed everything I've read by Susanna Kearlsey; she's definitely a new favorite. I hope you enjoy The Winter Sea as much as I did. It's a keeper!

Everyone seems to love this book which makes me very envious. I can't seem to track it down here.

Cat - If you go to Susanna Kearsley's website and click on the bottom "Buy the Books" it will show you several world-wide sources to find her books. Fantastic Fiction also includes sources for buying used books, and I've had good luck on Amazon finding her books at used prices. Hope this helps you find The Winter Sea -- it's a good one!