The Countess and the King by Susan Holloway Scott

"In the decadent court of King Charles II, Katherine Sedley was a lady who lived by her own rules and loved where she pleased....
Katherine Sedley is born to wealth and privilege in seventeenth-century London, and her unconventional upbringing includes a mad mother who believes that she's the queen and a father who is one of the most notorious libertines in Restoration England. Katherine quickly becomes a favorite at the palace for her sly wit and daring, and she soon attracts the attention of the married Duke of York, His Majesty's brother. She snubs respectable marriage to become the duke's mistress, but when her lover becomes King James II, she is suddenly cast into a tangle of political intrigue in which a wrong step can mean treason, exile, or death on the executioner's block. As the risks rise, Katherine is forced to make the most perilous of choices: to remain loyal to the king or England."
(from the publisher)

I have to admit, I was not at all familiar with the story of James II and Katherine Sedley before reading this book. I've read different accounts of the more well known royal mistresses such as Nell Gwyn, the Countess of Castlemaine, and the Duchess of Portmouth, just to name a few, but Katherine Sedley was unknown to me. After reading and thoroughly enjoying The Countess and the King, I felt Susan Holloway Scott did a wonderful job of bringing this unique and delightful character to life.

Katherine had a very unorthodox upbringing. Her mother suffered from delusions and was sent away, leaving her father in charge of her upbringing. He was favored at the court of King Charles II and enjoyed many royal connections, as well as being a playwright. Thus, Katherine spent her very young days attending plays and mingling with the bawdy group of actors and actresses (Nell Gwyn among them) at the theatre and in taverns. As a precocious child, Katherine was just as at ease in the company of royalty as she was with the theatre group. But what set Katherine apart was her frank manner of speaking and her appearance. Definitely not considered attractive in her time, she had plain, bold features that caused her to be cruelly ridiculed for her lack of beauty. She was very witty and had no qualms about speaking her mind -- I applauded when she frankly put people in their place when they insulted her appearance! I just loved her spirit -- she had such a strong sense of independence and a no-nonsense approach to life; her doting father supported her desire to marry only if she found true love. While she was not very lucky in love during her earlier relationships, she found a deep and lasting relationship as the mistress of the Duke of York (who later became King James II and bestowed the title of Countess of Dorchester upon his beloved Katherine). Theirs was an unusual relationship -- he, the King of England and devoutly Catholic, and she, an outspoken, Protestant mistress that was not beautiful -- but they evidently found deep satisfaction and contentment in each other throughout the years, until their inevitable parting.

Katherine Sedley was a very engaging heroine, and I enjoyed the world of Restoration England in The Countess and the King. I'm very much looking forward to reading more of Susan Holloway Scott's royal mistress novels. 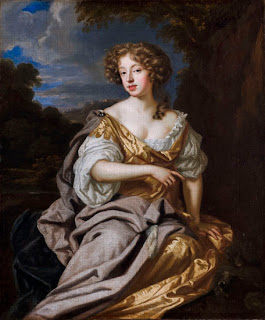 A portrait of Katherine Sedley

I thoroughly enjoyed this book too - it was one of those lesser known women for me. I'm glad you enjoyed this one too!

Hi, Dolleygurl -- I love this period in history, and can't wait to read more from this author. :)

I am a big fan of all of Susan Holloway Scott's books! You have a big treat in store as you work your way through the backlist.

This sounds good! Haven't read any of her books yet but I have one.

Oh how yummy! I haven't read much old Euro drama (unless we're talking old old like William S!) but this looks like too much fun to pass up...

I always love a good historical novel. This one sounds intriguing!

Great review. I may add this to my books-to-read. I don't know much of her either....it'll be interesting to find out more about her.