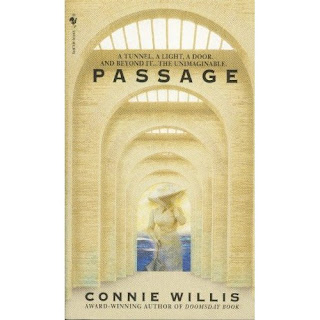 "Dr. Joanna Lander is a psychologist specializing in near-death experiences. She is about to get help from a new doctor with the power to give her the chance to get as close to death as anyone can. A brilliant young neurologist, Dr. Richard Wright has come up with a way to manufacture the near-death experience using a psychoactive drug. Joanna's first NDE is as fascinating as she imagined--so astounding that she knows she must go back, if only to find out why that place is so hauntingly familiar.

But each time Joanna goes under, her sense of dread begins to grow, because part of her already knows why the experience is so familiar, and why she has every reason to be afraid. Yet just when Joanna thinks she understands, she's in for the biggest surprise of all--a shattering scenario that will keep you feverishly reading until the final climatic page."
(from the publisher)

Having previously read and enjoyed Doomsday Book by Connie Willis, I added Passage to my list for the 2011 Time Travel Reading Challenge.

Passage was truly one of the most unusual and thought-provoking books I've read in a long time, but it left me with ambiguous feelings. At times, I absolutely loved this thriller and couldn't put it down; other times, I was frustrated and felt like I was an experimental mouse being led through a never-ending maze and constantly crashing into dead ends. It was over-long and intense, and I got tired of wading through pages and pages to find one little tiny piece of a never ending puzzle and repetitive passages. How can you like and dislike a book so much at the same time? Strangely, when all seven-hundred-and-eighty pages were over, I believe it was a fascinating (science fiction) view of life and death, but would have been much improved by judicious editing (like about two-hundred pages or so!).


There's really no way to talk about this book without giving away some aspects of the plot. In a nutshell, two doctors at Mercy General Hospital, Dr. Joanna Lander and Dr. Richard Wright, team up to study the near-death experience. The purpose of their research is to collect objective data to determine if there are similarities in NDE's and to attempt to determine the cause of NDE's. Is the NDE the body's survival mechanism? Is it a result of chemicals released in the brain as the body undergoes trauma?

Dr. Richard Wright's startling research into NDE's attempts to simulate a near-death experience in his volunteers. By injecting drugs into the volunteer patients and monitoring their brain activity and vitals, the individuals undergo a controlled near-death experience. All the physical data is recorded for comparison among volunteers, and then they are interviewed about their experience...what or who did they see? feel? hear? smell? What were their surroundings? Was it a comforting experience or a frightening one? One by one, the volunteers abruptly drop out of the experiment after their first experience, and it's impossible to get more volunteers to take their place. In order to keep the project from closing down, Dr. Joanna Lander volunteers to go under herself, and the frightening and startling consequences kept me on the edge of my seat! Each time Joanna is injected with the drug, she experiences being in a dark passage with a light at the end.....people are dressed in white in the far distance....it is extremely cold.....each time she returns, more clues reveal where she is during her NDE....there is water all around.....flares are being sent up.....people around her are confused and frightened....looking for lifeboats.......water is filling the bottom.....SOS....SOS...Get where this is going?


There is so much more to this complex plot, and so many brilliant literary comparisons and insights into the meaning of life, the experience of death, and individuals' perception of the experience of death. One of the richest characterizations in the story was that of little Maisie, a precocious patient who is waiting for a heart transplant and facing the possibility of death on a daily basis. Her obsession with great disasters of the centuries (Pompeii, the Hindenburg, etc..) is a chilling reflection of her own efforts to make sense of her feelings and the prospect of facing death. There is lots of comic relief with this sassy little darling who can talk her way out of (and into) all kinds of trouble.

I haven't even scratched the surface of this story -- there was much to contemplate, and one of the most chilling parts of Passage were the chapter quotes -- the purported last words of people in history....very haunting and eerie. The ending left me scratching my head as I didn't expect it to end on a note of hope, but it strangely has (in my interpretation) religious symbolism, but that could just be my orientation. Who knows? Only people who have really died know the truth, and so far, they're not telling.

**This book is more science fiction thriller than time travel, but I'm using it for the Time Travel Challenge since there is some element of going back in time.

Yours is the first review I've seen of this book, but I put it on hold a few days ago at my library. I'm still hopeful that I'll like it.

Alyce -- I'll be curious to see what you think.