Every Secret Thing by Susanna Kearsley 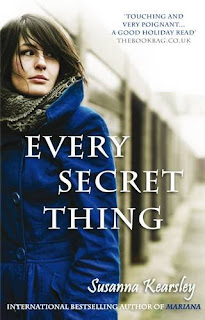 'No one lives for ever. But the truth survives us all'.

"Kate Murray is deeply troubled. In front of her lies a dead man, a stranger who only minutes before had approached her wanting to tell her about a mystery, a long-forgotten murder. The crime was old, he'd told her, but still deserving of justice. Soon Kate is caught up in a dangerous whirlwind of events that takes her back into her grandmother's mysterious war-time past and across the Atlantic as she tries to retrace the dead man's footsteps. Finding out the truth is not so simple, however, as only a few people are still alive who know the story - and Kate soon realises that her questions are putting their lives in danger. Stalked by an unknown and sinister enemy, she must use her tough journalistic instinct to find the answers from the past - before she has to say goodbye to her future."
(from goodreads)

Originally published under the pen name Emma Cole, the new Every Secret Thing e-book is Susanna Kearsley's contemporary thriller. I am a fan of her historical/romantic suspense titles (particularly those with a time slip element), so I was curious to sample her contemporary mystery. It was a well-crafted dual storyline thriller that had me guessing until the end how all the threads tied together.

Kate Murray is a Canadian journalist working on assignment in London when she is approached by an elderly gentleman who tells her....

"I have a story I could tell you, if you're interested...there's a murder in it.
An old murder, but one still deserving of justice."

Being far too busy working on her assignment, Kate doesn't give the elderly man much of her attention. He gives her his card and invites her to call him when she has more time, and leaves with a very mysterious comment.

"Oh, and do say hello to your grandmother for me. I hope that she's well....
You have her eyes, you know."

But Kate never has opportunity to learn more of the cryptic message about an old murder as Andrew Deacon is dead within minutes.

This shocking event leads Kate to begin using her journalistic skills and instincts to begin investigating the secret that Andrew Deacon had wanted her to know. Her investigations bring to light her grandmother's secret past during WWII that she kept hidden throughout her lifetime. But more people will die, and every step that Kate takes to uncover more information causes more danger. No one can be trusted and people are not all who they seem to be, and someone will stop at nothing to keep the story from being uncovered. Going under cover with a different name and look, Kate's clues lead her to Lisbon where wartime spies and secret business deals left someone getting away with murder many years ago. Clue by clue, she desperately tries to fit the pieces of the puzzle together before the murderer strikes again.

While this mystery was fast paced and suspenseful, the strength of the plot for me was the lovely back-story that unfolded of two ordinary people making an extraordinary sacrifice as part of their duty during the war. Fate brought them together briefly, but their short time together left a lasting bond. Their sacrifice was not unrealistic as Kearsley based her story on the true British Security Coordination in NY, a spy agency established under the cover of the British Embassy and Passport Office, where the United States, Britain, and Canada shared intercepted intelligence during WWII. It was a very interesting piece of history that was new to me.

A bit of a departure for me as I don't usually read many contemporaries, but a treat if you are looking for something unique from Susanna Kearsley.

This is one of the Kearsley novels I haven't read yet! Bad fangirl!

Marg - I'm glad some of her titles are coming out in e-book format so more people will have access. I had to hunt down used copies from the UK when I first discovered her books about 2 years ago. You're not a bad fangirl at all....you just have something from SK to look forward to! :)

This is one of the two Kearsley novels I haven't read yet (the other being Splendour Falls). I think I'm going to make it my mission to read both before the new year!

Melissa - I've tried to find a reasonably priced Splendour Falls book, but they are over the top! Some for over hundreds of dollars! Um, I don't think so! Good luck and let me know if you come across a copy.

I bought a copy used, but it is being re-issued here on 16 April 2012. If you don't mind paying the shipping you can order a brand new copy from a Canadian bookseller - chapters.indigo.ca or amazon.ca
It might also become available at bookdepository.com since the Canadian version comes courtesy of the UK publisher.

Okay, I just checked, and it will be released via bookdepository.com on 30 April 2012 so that would probably be your best option :-)

I've only read Mariana which I just loved!

Thanks, Melissa, for the info -- I'll wait until it is reissued. So happy so many of her titles are back in print (or in e-book).

Mystica - You have many good reads ahead.

You confirmed that my Kindle purchase of this title the other day was money well spent! yay!!