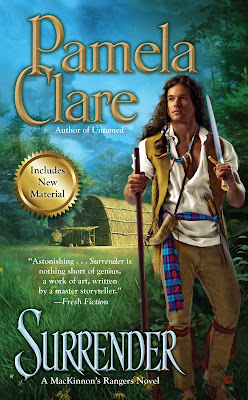 A hand-picked cadre of warriors, they had the fierce courage of their Scots forefathers, combined with the stealth and cunning of the Indians who lived beside them in the wilderness. Battling the French in no-holds-barred combat, they forged a new brand of honor, became a new breed of men…

Iain MacKinnon had been forced to serve the British crown, but compassion urged him to save the lovely lass facing certain death at the hands of the Abenaki. He’d defied his orders, endangered his brothers, his men and his mission, all for a woman. But when he held Annie’s sweet body in his arms, he could feel no regret. Though he sensed she was hiding something from him, it was too late to hold back his heart. In love and war, there are times when the only course of action is… Surrender.


Book news! Pamela Clare's MacKinnon Ranger series has a new publisher and the books are getting a fresh cover look and new material added as they are re-released.(And it's available on kindle.) If you love a great adventure, an historical setting during the French and Indian War, and a passionate love story, then Surrender is for you!

As Pamela explained on her website, her previous publisher had strict guidelines for the length of books they printed. She was forced to cut some material from Surrender to meet those guidelines. Now, the story has been tweaked to include scenes that Pamela feels will make the story even more enjoyable, and I'm glad she was given the opportunity to write Iain and Annie's story the way she originally intended. I'm sure she made an already terrific book even better.

I won a signed copy of this newly released edition, so I'm looking forward to reading it again. (My glowing review of the original version is here.)
Posted by Joanne at 9:04 AM

Sounds awesome...I just went to Goodreads and see that I blamed you for adding book one to my reading list!!! I'm glad that she found a publisher that understood that she needed to tell the story in its entirety!!

I'm banking on it that you won't be disappointed, Staci! Enjoy!