Today, I have the great pleasure of welcoming Christine Blevins, author of the historical fiction novel, The Turning of Anne Merrick as part of the Historical Fiction Virtual Book Tour. Not only has she written an interesting guest post about Valley Forge, she is also offering a very unique giveaway!


“THESE are the times that try men's souls. The summer soldier and the sunshine patriot will, in this crisis, shrink from the service of their country; but he that stands by it now, deserves the love and thanks of man and woman.”
– THOMAS PAINE
The American Crisis

When I get deep into the researching the events and places I plan to feature in my story, I am often surprised to find the picture that emerges from the historical record is so different from the history I thought I knew. The winter encampment endured by George Washington’s Continental Army is an event important in our nation’s founding, but one I found blurred by myth and legend. 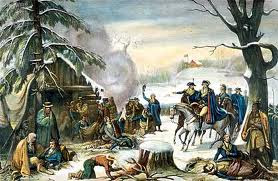 There is no question it was a dangerous time. The bulk of the Continental forces retreated to the Pennsylvanian valley in a weakened state. Warm clothing was scarce. Rations were in short supply, and delivery was sporadic. Unsanitary conditions created an environment where typhoid, small pox and parasitic infestations plagued the troops. The fledgling nation’s currency was almost worthless. Soldiers’ pay was in arrears, and desertion was rampant. Always a constant threat and worry, the well-supplied British Army was settled into winter quarters in Philadelphia little more than twenty miles away.

The more I read, the more I came to find Valley Forge was not all misery and despair. These are some of the facts and events discovered in the record, and depicted in The Turning of Anne Merrick:

• 12,000 soldiers were encamped in Valley Forge, and 2,000+ died there that winter – but not one died of starvation or freezing. Disease was the soldier’s worst enemy, and spread of disease was exacerbated by poor camp sanitation practices and crowded conditions. General Washington’s order to inoculate the troops no doubt saved the army from being decimated by smallpox. 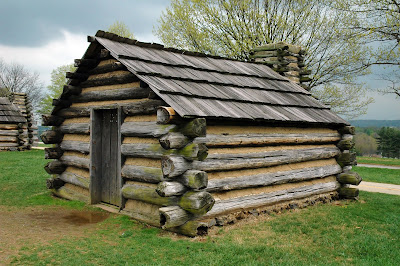 • Though the valley was almost devoid of shelter when the troops first arrived, they quickly built simple, but relatively tight log huts. Combined with the availability of fuel, shelter and warmth was not an elusive commodity. Warm clothing and decent footwear, however, were very scarce.

• Though food wasn’t abundant, or varied, it wasn’t absent. The cargo of cornmeal, beans and salt pork Anne and Jack brought into the camp was indicative of the type of supplies distributed among the ranks. Oneidan Indians brought hundreds of bushels of cornmeal to the encampment as a gift to their allies. The supplies confiscated from the pair of captured British supply ships included butter, flour, pork and chickens.

• The weather in 1777-78 was pretty typical for a Pennsylvanian winter, and not near as harsh as the severe weather experienced by the troops in the winter encampment at Morristown two years later, which is considered to be one of the worst winters of the 18th century.

I try to write the kind of historical fiction that I like to read –exciting adventure stories populated with compelling characters, all supported by a backdrop of vivid and accurate history. In The Turning of Anne Merrick I strived to depict a Valley Forge experience truer to the record than the myth, and show it as a place where determined and resourceful citizen-soldiers endured hardship and did what they had to do in order to survive and fight another day.

Giveaway Details:
A copy of The Turning of Anne Merrick and 18th Century Sheets and Envelopes – Decorated with a feather quill, secured with stout cording for convenient stowing amid your gear. 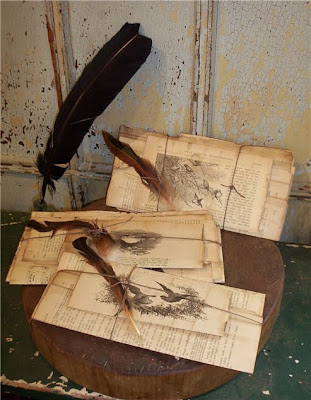 For a chance to win a copy of The Turning of Anne Merrick and the unique 18th century stationery bundle, leave a comment with your name and contact info. The contest is open internationally and will end March 1, 2012. GOOD LUCK!

The Turning of Anne Merrick is the second in a 3-book series set during the American Revolution, and the companion book to The Tory Widow. A native Chicagoan, Christine Blevins lives in Elmhurst, Illinois, along with her husband Brian, and The Dude, a very silly golden-doodle. She is at work finishing the third novel inspired by a lifelong fascination with the foundations of American history and the revolutionary spirit. For more information about Christine Blevins and her books, please visit www.christineblevins.com

***Books, Belles and Beaux would like to thank Christine Blevins for the wonderful guest post and giveaway!***

This sounds like a such a good book! I would love to read it thanks!

I love this time period but haven't read very many Historical fiction books set during this time!!

I just added this book to my wishlist yesterday! It looks like a great read. Thanks for the chance to win!

I almost missed this post as I was from home for four days! please count me in.

I really enjoyed reading about the period of time spent at Valley Forge. It wasn't quite what I had thought of it like. It put things more into perspective for me.

No need to enter me for the giveaway.

read the review of this book, sound so interesting

thanks for the giveaway.

Fabulous guest post -- I'm reading this now and looooooving it. So good. No need to enter me in the giveaway, though -- just had to gush about how awesome Ms Blevins is!

Oooh the battle of Valley Forge was always an interest of mine. One of my favorite books as a kid was the Dear America book 'Winter of Red Snow'. Sounds like a great book. Count me in!

I really don't know too much about the Battle of Valley Forge. It would be great to get a book like this and be able to learn something about it. Thanks for the giveaway!

Kitchen Witch of the West said...

I want to read this so much, and my local library can't seem to get a copy. Thank you for holding the giveaway...the additional info and the chance to win are great.

A great giveaway, thanks for running it.