I am pleased to welcome Donna Russo Morin, author of The King's Agent, to Books, Belles, and Beaux with a guest post. She is currently doing a virtual tour with Historical Fiction Virtual Book Tours.


FLORENCE: THE LAND OF MY ANCESTRY 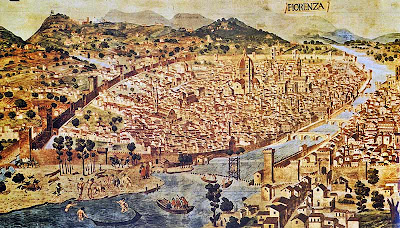 The adventurous characters (both real and imagined) in The King’s Agent travel hither and yon across the middle landscape of that strangely shaped country known as Italy; from Rome, to the mountains of Ciociaria, to Camogli onto the sparkling west coast. But their story begins and ends and returns now again—for succor and respite—to Florence. So it is to Florence today we go.

But first I must tell of my own connection, one I didn’t know existed until after I wrote this book. Yes, in that glorious small speck of time between completing one book and starting another, I sent out a query to an organization that researches surnames. It took them a while to complete the appropriate investigation, during which time I developed the basic idea for my next work in progress, a trilogy also set in Florence on the birth of the female Renaissance artist. It would seem as if my fascination for the ancient city was firmly entrenched in my psyche. The information, when it came from the research institute, wonderfully illustrated with my family crest on parchment looking paper, declared that the origin of my family was, most probably… Florence. My ancestors have been calling, and I am answering that call as best I can.

Julius Caesar named the city ‘Florentina’ (meaning ‘flourishing’) when founded in 59 BC as a military retirement haven. How portentous the name would come to be. Yet there is evidence of occupation dating back to prehistoric times. Caesar developed the city, true, with the assistance of the great Roman general and statesman Lucius Cornelius Sulla, from a military state of mind, one that is still in evidence even today. Situated on a major artery leading to Rome, the Via Cassia (still known by that name in the heart of Rome, as the A1 for hundreds of miles leading throughout the country) it was rich with fertile farmland. The combination proved successful and it soon grew from a small Roman settlement to a lively commercial epicenter. 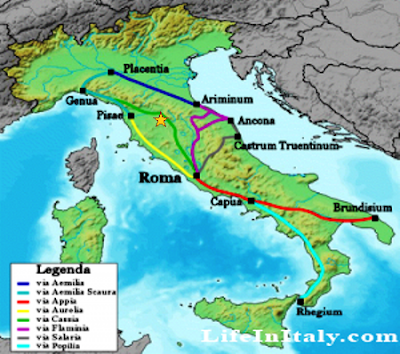 Enclosed in a wall approximately 1800 meters long, the city is rectangular in shape, and developed, as did most cities initially Roman, with straight roads and right angles. The main roads led to four towered gates and the Arno—a major river flowing in from the west coast—at first lay outside its gates. Located at the apex of main roads and a large river, found Florence growing rapidly, commercial activity and trade thrived, as did the city.

Christianity made its way to Florence in the second century and by the next, churches began to spring up like the shoots of spring flowers. Today there are close to forty churches and it is these religious houses that are partially responsible for the birth of the Renaissance.

Like so many other locations in Italy, Florence was prey to the pillaging of the Barbarian invasions of the Dark Ages. And though the city built more interior city walls, they too fell to the Lombards, the dark period of the city’s history.

But from out of the darkness, came the light.

By the 8th century, a feudal system was established in Florence, in truth throughout Tuscany, and the city became a county of the Holy Roman Empire, changes that were both a blessing and curse. More city walls were constructed, more gates for protection and grandiosity, and over the next few centuries Florence continued to prosper and its population to grow exponential; a flurry of activity leading to one of human evolution’s greatest eras, the Renaissance.

Any great accomplishment or movement or change in the direction of human kind, does not come about because of one circumstance or the efforts of one human, but from a conglomeration of magnificent events…the perfect storm. Such was the Renaissance and its birth in a city named Florence.

Its inception can be found, in part, in the politics of the city. A strife-ridden communal system gave way to an oligarchy, a system that would rule the city on and off for hundreds of years. The greatest of all the oligarchies belong to the Medici family (who are not only minor players in The King’s Agent, but who will be taking more center stage in my current works-in-progress). Yes, these were men who had undeniable, dare I say obnoxious, certainty in their superiority, but they were also gifted with open curious minds whose craving for knowledge and truth and beauty brought new and enlightening concepts to within the city walls. Harking back to the teachings of the Greeks and the Romans, they revived the value of the human being and, within this eagerness for knowledge and enlightenment, Humanism was born. Man came to consider himself God’s greatest creation and combined with a craving for rational thought and an affirmation of the natural environment in which he existed. A distinctive characteristic of Humanism was the glory of art, of man’s ability to manipulate media into whatever form they chose. 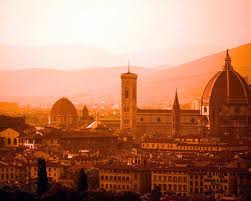 The rise of Humanism, the profusion of churches—churches which needed pious artwork to compete with the glory of its architecture—combined with the unflattering urge of humans to outdo each other, brought together all the necessary ingredients for an artistic explosion: fertile temperament, a surplus of venues, and the need for the leading citizens to become the leading citizen, producing a plethora of patrons vying for the best artists of all sorts. It was a collision that had never happened before, one that some hope will happen once again (one that I personally believe took place in the 1960s).

But it was not only painters and sculptors that Florence and its rebirth produced, though there were those a plenty, to name a few: Giotto di Bondone, Masaccio, Domenic Ghirlandaio, Perugino, Michelangelo, Raphael, Botticelli, Titian, and, of course, Leonardo da Vinci. And those are just the upper echelon of painters. Architecture reigned supreme as well under the skillful hands of Brunelleschi, Leone Alberti, Palladio, and Bramante. And their glory was all written about with equal talent by the writers of the age: Petrarch, Boccaccio, Luigi Pulci, and Poliziano. In fact, so many of Italy’s greatest writers and poets were connected to Florence, its dialect came to be known as the official Italian language, beginning with the appearance of Dante’s Il Divina Commedia, a powerful component of the multilayered tale that is The King’s Agent. The power of Florence was felt in almost every facet of Renaissance life. The currency of the city, the gold Florin, came to be the most valued, not only in Italian but to all the corners of Europe, from Hungary to Britain to Bruges, and everywhere in between, and helped to develop industry across the continent. 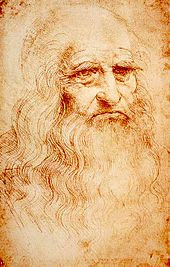 The King’s Agent brings us to what is considered the end of the Renaissance, but it will not be the last you hear of it—and of Florence—from the tip of my pen.
Posted by Joanne at 6:00 AM

I've had the opportunity to visit Florence and loved the city, especially the architecture. I hope to get back there one day. What a great history the city has. I look forward to learning more about it through your novels.