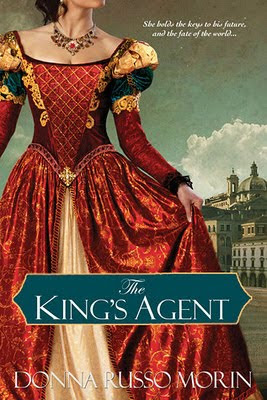 Donna Russo Morin, author of To Serve a King and The Secret of the Glass, puts her fresh, original spin on historical fiction with this intriguing novel set in 1500's Italy, as an agent for the king of France searches for an elusive masterpiece and discovers a woman with a dark secret.....

The King's Agent was quite an unusual reading experience....while I began the novel expecting a fairly straight-forward historical fiction novel featuring Battista della Palla -- an actual "patriotic plunderer" of the 16th century -- I soon found out that I was quite wrong in my assumption.

Set against the backdrop of political turmoil in Italy in the 1500's, Battista, along with his band of cohorts in crime, is commissioned to find a sculpture for Francois, the King of France. This sculpture, hidden for years from the world, is believed to have special powers, and once in possession of it, it would give France the power to overcome its enemies. The quest to find this powerful object begins with the clues from the canticles of Dante's Divine Comedy as well as a search for a Giotto triptych. Battista is nearly captured during one of his escapades, and the beautiful and mysterious Lady Aurelia (held for lifetime in seclusion) helps him escape. Delighting in her new-found freedom, Aurelia travels with Battista helping his group interpret clues and enjoying the rare opportunity for adventure. Their dangerous search for the powerful relic becomes of game of survival through "hell, purgatory and paradise" as they cross Italy following clues and outwitting dangerous traps and challenges. Will they be successful in reaching the artifact, or is its power too dangerous for mortal man?

A blend of mystery, art history, adventure, puzzles, the supernatural/mystical and a touch of romance makes the The King's Agent quite a unique read. The strength of the novel for me was that the author did a wonderful job of capturing the "flavor" of 16th century Italy, and the references to pieces of art and literature inspired me do a search for more information.

On a side note, I'm not familiar with the video game The Legend of Zelda, but the author mentions the inspiration for the adventures and challenges in The King's Agent were inspired by this video game.

***I received an advance uncorrected proof from the author and publisher (Kensington Books) in exchange for a fair and honest review.*** 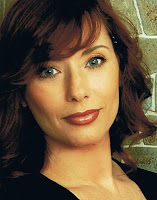 Donna Russo Morin is a graduate of the University of Rhode Island. In addition to writing, editing, and teaching, Donna dabbles as a model and actor. She lives with her family in Rhode Island.

For more information about Donna Russo Morin and her books, please visit her website at www.donnarussomorin.com. 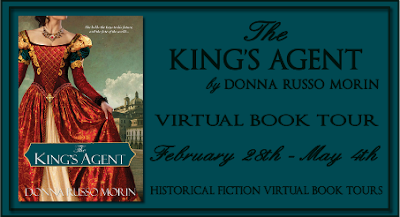 For more information about the Historical Fiction Virtual Book Tour for The King's Agent, click here.
Posted by Joanne at 6:00 AM

Good review. I generally enjoy novels that mix in a bit of adventure/thriller with the historical so I think I'll have to check this one out.

Your review was so good and just reading it made me wish that my encounter with this one had went so well!!

Melissa - Some of it went right over my head (ha!) but if you enjoy a bit of "Indiana Jones" added to history, you might give this one a try.

Staci - I'll be looking for your review to see your reactions.

I thought the same thing when I was reading it-normal historical, but nope! Indiana Jones is a good comparison. When the hints start falling about one of the characters not being what they seem I originally thought "Oh no! Please don't let this be wandering into vampire/paranormal territory!" I was pleasantly surprised by this book and will be making time in the near future to read the other 2 I have by her.