Hiding from the Light by Barbara Erskine

"Across the peninsula the mist rolled in, its icy fingers curling up the cliffs. Inside their houses, people stirred in their sleep and children cried in the dark.

The parish of Manningtree and Mistley has a dark history. In 1644, Cromwell's Witchfinder General tortured scores of women there, including Liza, the herbalist, whose cottage still stands, and Sarah, the daughter of the manor. And the spirits of his victims haunt the old shop in the High Street, they say.

Emma Dickson gave up her high-flying career to live in Liza's cottage, but now, as Halloween approaches, she is being driven half-mad by visions of the terrible past.  In despair, Emma turns to the local rector for help, but he, too, is in the grip of something inexplicable and dangerous....."
(from the publisher)

Classic Erskine as she weaves a tale where the past and the present collide. She's someone I turn to when I want to hunker down on a quiet evening (if it's raining or cold, even better) to get whisked away to another time and place and enjoy a good thriller.

Hiding from the Light begins with a terrifying piece of seventeenth-century history. Historical figure Matthew Hopkins, known as the Witchfinder General, has waged a war against "witches" and followers of Satan by torturing his female victims (many innocent healers/midwives/herbalists). Horrifying practices of pricking the women with a needle until they begged for mercy, "floating" the accused in a lake, and other cruel and horrifying practices struck fear in the hearts of the women of Essex. However, in the present-day village of Manningtree, his evil spirit is beginning to manifest itself as a dark and insidious mist in the quaint English countryside. Ghostly images of the witch hunter are seen in a local store, and several inhabitants of the town are possessed with the spirits of his victims now trying to seek their revenge.

I loved this atmospheric ghost/witch story, and of course, knowing that parts of the historical plot were based on fact made it absolutely chilling. Another fabulous suspenseful and spooky read by Barbara Erskine! Perfect for a Halloween read. 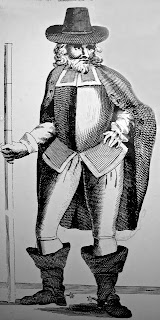 Labels: Barbara Erskine, Hiding from the Light, Read in 2012

It's been a few years, but I recall plenty of things that go bump in the night.

This does sound like the perfect book to read during this time of year!

I enjoyed this one, too, although not quite as much of some of Erskine's other novels. I agree with the other posters about this being a great book to read at this time of year.

Sounds a good one!

I love the sound of this one and just know that I too will love it!! Off to buy it for my Kindle!

Boo! Hiss!! It's not available for the Kindle!!!

@Staci - darn it! She's big in the UK where her books are more available than here in the US

Your review gives me chills! I love ghost stories, and this one sounds amazing. Thanks for the recommendation!

Diana - If you love to be spooked, try Barabara Erskine's House of Echoes. Loved it! And thank you for visiting and following! :)