With all of the attention and excitement of the news from Leicester, England confirming the skeletal remains of Richard III, I decided this would be a good time to search my shelves and spotlight a few of my favorite novels that feature Richard III.

Perhaps one of the most popular historical fiction novels that attempts to redeem the much-maligned Richard III is Sharon Kay Penman's The Sunne in Splendour. A fabulous read! 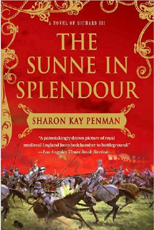 "A glorious novel of the controversial Richard III---a monarch betrayed in life by his allies and betrayed in death by history.In this beautifully rendered modern classic, Sharon Kay Penman redeems Richard III---vilified as the bitter, twisted, scheming hunchback who murdered his nephews, the princes in the Tower---from his maligned place in history with a dazzling combination of research and storytelling.
Born into the treacherous courts of fifteenth-century England, in the midst of what history has called The War of the Roses, Richard was raised in the shadow of his charismatic brother, King Edward IV. Loyal to his friends and passionately in love with the one woman who was denied him, Richard emerges as a gifted man far more sinned against than sinning.
This magnificent retelling of his life filled with all of the sights and sounds of battle, the customs and lore of the fifteenth century, the rigors of court politics, and the passions and prejudices of royalty." 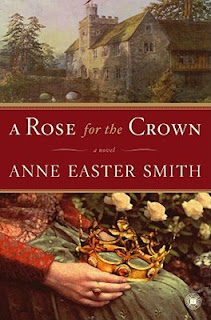 "In A Rose for the Crown, we meet one of history's alleged villains through the eyes of a captivating new heroine -- the woman who was the mother of his illegitimate children, a woman who loved him for who he really was, no matter what the cost to herself.

As Kate Haute moves from her peasant roots to the luxurious palaces of England, her path is inextricably intertwined with that of Richard, Duke of Gloucester, later King Richard III. Although they could never marry, their young passion grows into a love that sustains them through war, personal tragedy, and the dangerous heights of political triumph."


On the lighter side of things, Elizabeth Peters (of the Amelia Peabody series, aka Barbara Michaels) gently pokes fun at the Richard III Society in this witty mystery, The Murders of Richard III. "In a remote English manor house, modern admirers of the much-maligned King Richard III--one of Shakespeare's most extraordinary villains--are gathered for a grand weekend of dress-up and make-believe murder. But the fun ends when the masquerade turns more sinister . . . and deadly. Jacqueline Kirby, an American librarian on hand for the festivities, suddenly finds herself in the center of strange, dark doings . . . and racing to untangle a murderous puzzle before history repeats itself in exceptionally macabre ways." 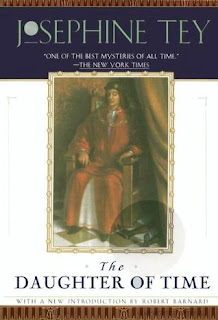 "In one of Tey's bestselling mystery novels ever, The Daughter of Time,  Scotland Yard Inspector Alan Grant is intrigued by a portrait of Richard III. Could such a sensitive face actually belong to one of history's most heinous villains—a king who killed his brother's children to secure his crown? Grant determines to find out once and for all what kind of man Richard was and who in fact killed the princes in the tower."


This book is on my TBR shelf, so I haven't read it yet....but it looks very interesting. 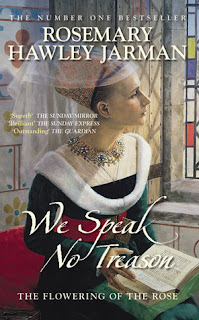 We Speak no Treason by Rosemary Jarman

"In this superb novel, as spell-binding as any tale of high adventure, but firmly based upon contemporary records, Richard III lives again through the eyes of his intimates and the woman whose ill-starred love brought him brief joy, and her a bitter consummation. Against the background of lusty, fifteenth-century England, with its superstition and witchcraft, its courtly manners and cruel punishments, Rosemary Hawley Jarman presents a fascinating and faithful portrait of one of the most enigmatic figure in our history as he appeared to his contemporaries."


As you can see, my collection of Richard III books is not extensive,  but I'm always looking to expand my library. Do you have any recommendations of great Richard III books?
Posted by Joanne at 10:17 PM

I have been wanting to read The Sunne in Splendour for such a long time, I hope I get around to reading it soon!

Thank you for the recommendations! They all sound intriguing.

Here are several older books I've heard good things about that you might want to try and track down:

Under the Hog by Patrick Carleton

The White Boar by Marian Palmer

Daphne - Thanks so much for the recommendations!

I love books about Richard III, and The Sunne in Splendour is my absolute favourite. I've also read Daughter of Time, which I consider a must read for anyone interested him. I have A Rose for the Crown on my tbr pile, as well as Treason by Meredith Whitford, which is another attempt to de-vilify (is that a word? If not I think it should be) Richard.

Fabulous post, Joanne. I bookmarked the page so I'll have the titles handy. I am especially taken with THE SUNNE IN SPLENDOUR and A ROSE FOR THE CROWN.

I've read and marveled at THE DAUGHTER OF TIME - it's one of my all time favorite mysteries. I think it's a good place to begin as any. :)

Wasn't that an amazing find!!??? I would read all of these for sure!!! I think I might have some books about him but they're at the camper up north!!

The only one of these is A Rose for the Crown which I absolutely loved. It would probably make my top ten list of favorite books even.