The House of the Mayfair Witches 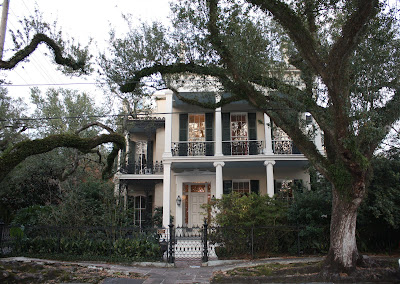 This past weekend, my husband and I attended a Christmas concert in the Garden District. Since we were a few minutes early, I suggested we drive around and enjoy all the beautiful holiday lights and decorations that are beginning to be displayed on some of the antebellum mansions in the area.

While we were driving around, I decided to look for the "The Mayfair Mansion" from The Witching Hour on the corner of First Street and Chestnut. (I just recently completed a reread of the book so it is fresh in my mind.) 1239 First Street is actually one of the former homes of Anne Rice and is the inspiration for the house in The Witching Hour. Here it is! It is an exquisite home and a private residence, very unlike the decaying fictional version of the Mayfair witches. Landscaping sheilded the side area of the home near the courtyard/pool area, so I couldn't get too close to take pictures of the side porch where a comatose Deirdre spent her days, nor can you see the dormer windows on the side where Antha fell to her death or the pool where Michael was found. But this is the house where the powerful witches Mary Beth, Julien, and Carlotta lived, and where Jazz Baby Stella threw wild parties and danced the Charleston before she, too, came to a tragic end. The new owners have also changed the color of the house, as it was a violet-gray color when Anne Rice lived there, and the book describes the house as violet.

from The Witching Hour by Anne Rice (p. 5)

"The doctor had never been inside an antebellum mansion until that spring in New Orleans. And the old house really did have white fluted columns on the front...Greek Revival style they call it -- a long violet-gray town house on a dark shady corner in the Garden District, it's front gate guarded it seemed by two enormous oaks. The iron lace railings were made in a rose pattern and much festooned with vines; purple wisteria, the yellow Virginia creeper and bougainvillea of a dark, incandescent pink....

Always he paused at the largest tree that had lifted the iron fence with its bulbous roots. He could not have gotten his arms around the trunk of it. It reached all the way from the pavement to the house itself, twisted limbs clawing at the shuttered windows beyond the banisters, leaves enmeshed with the flowering vines."
******
Really cool -- I told my husband I would freak out, though, if I saw "the Man" standing on the steps! (Lucky for me, Lasher was no where to be seen!)
Posted by Joanne at 9:10 AM

Labels: Anne Rice, The House of the Mayfair Witches, The Witching Hour

Hi, Laura! Thanks for stopping by -- glad you enjoyed the post. And I'm looking forward to your Bronte Challenge in 2010.

Nice! The house is beautiful!

Hi, Lezlie! Thanks for visiting -- I loved your review of Angel Time. So glad you thought it captured the essence of the old Anne Rice magic.

This looks so interesting! I love it! Great post Joanne!

Hi, Reagan! So glad you stopped by -- I know you've been busy with your classes and preparing for student teaching. Good luck and let me know if I can help you in any way when you get in the classroom.

Passages to the Past said...

Thank you for letting me know about this post - it's wonderful! I never knew Anne Rice actually lived there! It makes me want to read the novel again for the 4th time!

Hi, Amy! So glad you stopped by! I see by your comment that you love the novel, too!