Lady of Hay by Barbara Erskine

"Joanna Clifford is a confirmed skeptic. A hard-hitting journalist, she is all set to debunk hypnosis and the nonsense of past-life regression in her next magazine series...until she submits to a simple hypnotic session and finds herself inextricably bound to another time, another life as Matilda de Braose....until she learns that Matilda's loveless marriage, her secret passion for the handsome Earl of Clare, the brutal threats of death at the hands of King John, are very real...until she realizes that the pageantry, the passion, and the cruel facts of her past are still alive, changing and threatening her relationship to the man she thinks she knows and loves, the man who holds her in his arms--today."

I absolutely adore time travel stories, and I selected Lady of Hay by
Barbara Erskine as the first book to read for the Time Travel Challenge. It's one of those big, fat juicy novels that you just have to suspend your disbelief and allow yourself to be swept away to the cold, dark castles of the twelth century with fair maidens, chivalrous knights, secret lovers, and treacherous kings.

The present-day storyline of Joanna Clifford begins in the 1970's when she is 19 years old and submits to a psychological test to determine if she has the ability to be hypnotised and "regress" to a past time or life. Skeptical of the whole idea and ready to prove that hypnotism is nonsense, Joanna has a most unusual and near-fatal experience. The professors performing the regression have never seen such astounding results....Joanna begins to regress to a horrifying scene in the past, begging for her life, complete with bleeding wounds on her hands from scratching and clawing jagged stones. I was hooked on this book right from the start!

Alternating between the present day and the past in Wales, the fine line between the characters of the present (Joanna; her on-again/off again boyfriend, Nick; his brother and rival, Dr. Sam Franklyn; and a quiet admirer of Joanna, photographer Tim Heacham) begins to blur and blend with the players of Joanna's past life when she was Matilda de Braose, (her husband, William; her lover, Richard de Clare; her jealous enemy, King John). Matilda de Braose was known in history as Lady of Hay.

Her life becomes increasingly more complicated and dangerous when she cannot stop herself from continuing to regress to the past where the loves of her life (both in the past and present) become questionable: who truly loves her and wants to protect her, and who is really her enemy and determined to harm her?

Will the past replay itself in the present and doom Joanna to another dreadful end, or will life and love be given a second chance 800 years later?

Lady of Hay is sure to entertain those who love stories of another time, rich with historical detail, and full of suspenseful twists and page-turning, non-stop action. Definitely a reflection of the times when it was written (the 80's when Dallas and Dynasty were popular tv dramas) this story is an oldie but goodie! 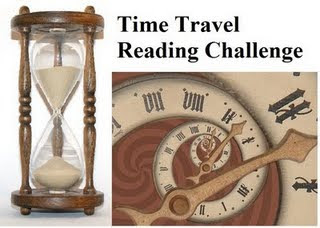 I've got this on my TT List TBR as well, I'm expecting my copy to come in the mail any day now from Paperback Swap. Thanks for the review, it seems like almost no one has read this book, it certainly is an oldie but goodie.

Hi, Julie -- I think you'll enjoy it! Definitely "dated" (you'll see what I mean when you read the present-day storyline), but an entertaining read on a cold weekend!

Hi Joanne, it's been almost 20 years since I fist read this book and reading your review makes me feel like getting it off my bookshelf and reading it again! Fantastic review!

That should say 'first' not 'fist' LOL.

Hello, Alaine -- Thank you for recommending this book at Queen of Happy Endings! It was very entertaining!

I don't believe in regressing to past lives, but that being said, I don't think I would have a problem setting aside disbelief and being sucked into this book. :) It sounds like it has a very good plot!

Hi, Alyce -- I don't believe in regressing either, (or going through stones, or through a time machine, etc..) but you gotta get to the past some kind of way to make a time travel story work! ha! Thanks for stopping by.

I loved this book when I read it years ago... reading your reviews I think I will hunt a copy down and enjoy it again!

I have recommended this book to so many of my friends. They all come over to borrow it!

Great from start to finish.