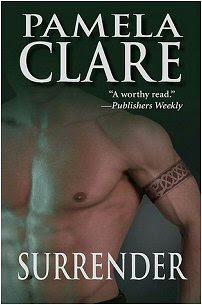 "A hand-picked cadre of warriors, they had the fierce courage of their Scots forefathers, combined with the stealth and cunning of the Indians who lived beside them in the wilderness. Battling the French in no-holds-barred combat, they forged a new brand of honor, became a new breed of men.....MacKinnon's Rangers."
(from the publisher)

Wow! What a fantastic read --I absolutely LOVED Surrender!

Heart-stopping, thrilling adventures, an amazing hero, and sizzling hot scenes...what's not to love? This one is going right on my list of favorites for 2010, and I'm anxious to explore more of Pamela Clare's books.

I was immediately drawn into the world of the untamed wilderness in colonial America from the very first raw, edgy scene in the prologue, and when I reluctantly finished the epilogue, I was ready to turn back to the first page and begin the adventure all over again! A compelling and passionate story of Iain MacKinnon and Annie as fate brings them together during the time of the French and Indian War.

It's no secret that I'm a huge fan of Diana Gabaldon's Outlander series, and Jamie Frasier is a worthy hero....but he may have a little competition with Iain MacKinnon! Rough and raw and braw and beautiful....Iain is the son of an exiled Jacobite, a transplanted Highlander who grew up alongside the Muhheconnoek. He is skilled in wilderness survival and Native American ways and is a man of deep convictions and honor.

His life takes a drastic turn when he and his brothers are falsely accused of murdering a man. Lord William Wentworth, a British commander, is behind this scheme, as he needs the raw power and brawn of the brothers to help lead the Rangers and fight for the British as they battle the French and their allies. Wentworth condemns the MacKinnon brothers to die on the gallows as murderers or accept his bargain to assist the British army.

It is during one of the Rangers' scouting missions for Lord Wentworth that Iain discovers Annie (Lady Anne Campbell, the daughter of a Scottish earl) as she is fleeing and in danger of being captured or killed by the Abenaki. Her past is mysterious and tragic, and she has been branded a thief and sold as an indentured servant in the colonies by her twisted uncle. Unable to leave a woman alone and in danger, Iain commands his brothers and Rangers to continue on their mission while he remains to rescue and protect her.

Their story of survival during the harshness of wartime in one of passion and adventure, and as their relationship and love develops and grows, secrets of the past come back to threaten their happiness and their future. Lies and betrayals...hopes and dreams....Surrender is a riveting historical romance with unforgettable characters in colonial America.

"She'd thought him a barbarian at first, and she'd been right. But there
was honor in him -- honor that went soul deep -- and courage as strong
as the roots of a mountain."

I loved, loved, loved this too - wasn't it great? I'm so glad you gave it 5 stars as well! The scenes of them together in the woods making their way back, it was so gripping, I was on the edge of my seat as if I was there with them - very well done - and the love scenes! *fans self* This is a keeper for me and worth a re-read! I loved them as a couple and I agree, he gives Jamie a run for the money!

Hi, Julie! Yes, yes, yes, it is a keeper!! I hated to see it end. (It's definitely not for those who blush easily!! LOL)