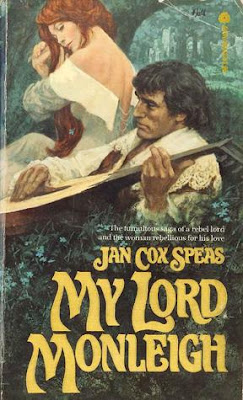 “Scotland was a land divided. The rightful Stuart had been driven into exile in France, his country ruled by the dour Presbyterians who had ridden into power on the coattails of Oliver Cromwell’s rise to power in England. All who opposed them were rebels and outlaws, to be hunted down and branded as traitors. And the man with the highest price on his head was Monleigh.

Anne Lindsay met him first on the windswept moors, though when first she saw him she had no idea who he might be. She knew only that he was handsome and that he did something to her heart, that here was the one man who could bring warmth and happiness into a life seemingly forever chilled by the bleakness of her early childhood. Monleigh was to give her everything that a man can give a woman, though in the process he was to change her whole life, for this was a man who believed passionately in the freedom of the individual and of his obligation to control his own life. What Anne Lindsay had to learn, and it meant that she all but lost him in the process, was that there is a responsibility in love that goes beyond the mere desire to love another.

Here is a novel of rare and haunting beauty, yet one whose broad narrative sweep is packed with movement and pageantry. It is a brilliantly exciting book by a writer of distinction.”
Original dustcover summary from 1956 Publication by Bobbs-Merrill

Another glorious tale of love and adventure from Jan Cox Speas that is rich with historical detail and vivid descriptions of another time and place.

Anne Lindsay, left orphaned as a child at the hands of English soldiers, is resigned to live out her days as a personal maid to her dour and fanatically religious aunt, Margaret. Margaret, desperately unhappy and bitter, feigns illness often and brow beats those around her, especially Anne, to attend to her every whim. Anne is frustratingly mild and meek around her aunt, but having been raised in this strict environment for many years and with no alternative, she has no choice but to be subservient. On a rare day out of the house to walk along the moors, she walks too far from Clennan House and meets a man that, unbeknownst to her, is the notorious Lord Monleigh. He is Scotland's most dangerous traitor, an outlawed highland chief. Even worse, he is rumored to indulge in debauchery -- and even murder -- when it comes to the women in his life. As fate would have it, he comes to Anne's rescue as she foolishly loses her footing along a steep slope. From this day forward, Anne begins a gradual transformation from meek and obedient to daring and courageous as her attraction and interest in Monleigh develops. Once afraid to dare cross her aunt for fear of punishment, she arranges secret meetings with Monleigh as they begin to share a passionate and dangerous attraction to each other. They share intimate evenings together in his castle where she sheds her puritan clothes and revels in gifts of clothes made from rich and sumptuous velvets, and meet secretly in the woods under glorious blue skies where he serenades her with lovely tunes on his lute. Anne learns a painful lesson, though, that the man she is falling in love with is as easy to tame as the waves on the sea....he is a smuggler, an adventurer, a rebel, a highland chief, an outlaw.....and destined to break her heart.

I adored this book and enjoyed the beautiful prose and descriptive passages of the Scottish setting and the period details. Since it was originally published in 1956, the romance is passionate and heartbreaking, but never explicit -- there's something to be said for leaving things to your imagination. ;)

One of my favorites is a passage where Anne, trying to understand her conflicting feelings, reflects on the nature of Simon Stewart, Lord Monleigh:

"I was under his spell, as I had come to be under the spell of this
west coast of Scotland. And his was the nature of a Highlander, after all,
a man forever fighting for the possession of himself. There was a dark
heritage in his blood, that same heritage of violence and disquiet
which had seethed through Highland history since the beginning of
time; and I would imagine that this unrest, this dark vein of passion,
must be guarded with a constant vigilance lest it stealthily conquer
a man's soul and abandon him to the darkness.

There was no portion of land in the world with so contradictory a
nature as the Highlands. Now, it was a land of sunlit moors stained
red with heather, knowing only the peace of quiet sky and the heart-
shaking beauty of the blue hills; now it was a harsh and awesome
place where silent mists obscured the peaks and a bitter relentless
rain came down from the skies, where an angry sea washed against the
shore, and sullen clouds reflected in sullen gray lochs. 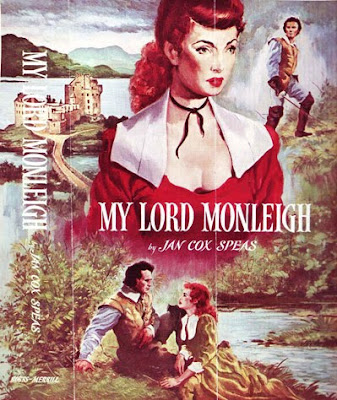 I want to get my hands on this book, your's is the second or third rave review I've heard.

Hi, Misfit -- This is the second book I've read by Jan Cox Speas and I enjoyed it even more than Bride of MacHugh. I know Sourcebooks is reissuing Bride of MacHugh and My Love, My Enemy, but so far, no news on reissuing Monleigh. Have you read anything by Susanna Kearlsey? Their writing style is very similar.

I definitely prefer books that leave a little bit to the imagination. :)

This sounds SO good! Great review!