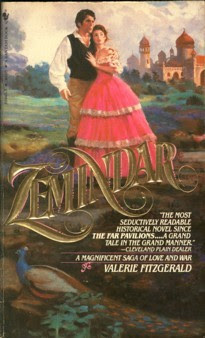 "A magnificent love story unfolds against the backdrop of exotic splendor and stirring deeds as young Englishwoman Laura Hewitt journeys to the East to the fabled fiefdom of the Zemindar, Guardian of the Earth. He is Oliver Erskine, hereditary ruler of his private kingdom, commander of his own native army - and brother of the man she loves. Subject to Britain's Queen, but also a son of India,, he walks the tightrope between treason to the Crown and betrayal of his own native land, a world both beautiful and dangerous, lit with splendor and torn by despair. Challenged by Erskine to plumb India's innermost secrets, Laura's quest puts her in thrall to the Zemindar himself, arrogant and demanding, lustful and compassionate, tender and persuasive. He infuriates her, invades her soul - and claims her as his own, forcing her to confront her own divided loyalties, her own mutinous heart."
(from the publisher)

It's been a long time since a novel has so captured my imagination and my heart -- Zemindar was simply wonderful and has now joined the ranks of my favorites! It is a rich, sweeping tale of adventure, love, and the horrors of battle during the Sepoy Rebellion of 1857 in India, and Valerie Fitzgerald's magnificent storytelling brings to life both the beauty and the dangers of the exotic Indian setting.

Laura Hewitt, a twenty-four year old Englishwoman, is living with her aunt and acts as a companion to her pretty younger cousin, Emily. Laura, by no means considered a beauty, has hopes that her feelings for Charles Flood will be returned, but unfortunately, he falls for Emily's charms and they marry. Hurt but stoic, Laura hides her pain and agrees to accompany the couple as they travel to India. Charles' half-brother, Oliver Erskine, is a rich and powerful zemindar (landowner and ruler) and Charles hopes to develop a relationship with him. Since Oliver is unmarried without an heir, Charles has plans to establish himself as a business partner and eventually share a portion of Hassanganj, Oliver's luxurious and palatial home. The British community here views Oliver with suspicion as he is harsh, unattractive, and a loner, and rumors abound of his relationships with Indian women and other questionable loyalties.

How Laura and Oliver come together, and the pain and suffering they each endure as they are separated during the rebellion, is just an extraordinary tale of mutual devotion and courage. After all the tragedies they survive, in the end, will Laura be able to commit to Oliver and stay in India, a place where she is haunted by terrifying memories? Or will she return to England, her home, where there is safety and security -- without Oliver?

**sigh** They just don't write them like this anymore! If you love novels such as Margaret Mitchell's Gone With the Wind, or M. M. Kaye's Trade Wind or The Far Pavilions, you'll love Zemindar.

Isn't this just fabulous? When you have a chance you'll want to read MM Kaye's Shadow of the Moon. Same setting (Sepoy rebelliong/seige of Lucknow Residency) but from a different perspective (outside the residency).

Hi, Misfit -- Oh, yes, absolutely! I have a beautiful 1956 hardcover edition of Shadow of the Moon with a really cool dustcover. Definitely plan on getting to it this year. :)

Great review. I'm definitely adding this one to my wish list.

I hope you enjoy it, Avid Reader! Splendid storytelling at its best.

with comparisons to Gone With the Wind how can we go wrong?? Sounds wonderful!

Hi, Staci -- Yes, there were many parallel storylines to GWTW...I was almost waiting for a sepoy to break out with, "I don't know nuthin' 'bout birthin' babies!!!" ;)

I loved Far Pavilions read about twenty years ago!!! this is going on my TBR.

Hello, Mystica -- I hope you have an opportunity to read Zemindar as it is divine! Thanks for stopping by!