The Devil in Music by Kate Ross 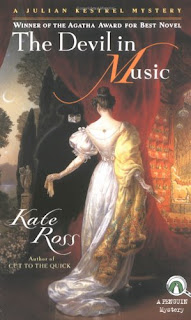 "At a mist-shrouded villa on Lake Como, an Italian nobleman is grooming a young English tenor for a career on the glittering operatic stage. Before their sojourn is over, one will die by violence and the other will disappear.

Enter Julian Kestrel, Regency dandy and amateur sleuth. Traveling on the Continent with his ex-pickpocket valet, Dipper, Kestrel is irresistibly drawn into this baffling murder case. Among the suspects are a runaway wife and her male soprano lover; a liberal nobleman at odds with Italy's Austrian overlords; a mocking Frenchman with perfect pitch; and a beautiful, clever woman who begins to haunt Kestrel's dreams.

Soon Kestrel is caught between the shadowy Carbonari - secret rebels against the Austrians - and the equally ruthless Austrian-sponsored police. But at the heart of the mystery is the captivating tenor known only as "Orfeo." Was he a political agent? A callous adventurer? A jealous lover? These questions take on a new urgency when the killer strikes again. And as Kestrel uncovers the truth, he risks becoming the next victim."
(from Goodreads)

The Devil in Music, the fourth and sadly the last installment of the Julian Kestrel Mysteries, is by far the most sophisticated and complex plot of the series. This a tale that incorporates a host of characters and their passions...passion for music, the opera, and passions of the heart which lead to revenge and murder. The story takes on multiple layers of mystery and intrigue as the characters become entangled in a web of secrets, spies, and hidden identities against the backdrop of a dangerous political climate in the northern Italian states in the 1820's. A bit tough at first to get everyone and their backstory straight, but once all the Italian characters were firmly in place and the politics of the time became clear, my patience was rewarded with a truly spectacular turn of events!

Kate Ross is a master of weaving the most intelligent and intriguing threads of mystery that I have ever experienced.....I've enjoyed each one of the books, but A Broken Vessel remains my top favorite. They are so rich in secrets and clues that I cannot wait to read them again even though I know how it will all work out in the end. It will be fascinating to watch how all the puzzle pieces "click" in to place and just marvel at the talent of this author (who sadly has passed away.) We learned so much more about Julian Kestrel, the popular English dandy, and we can only wonder what might have been planned for his future adventures. A highly recommended series for those who enjoy tough-to-solve mystery puzzles.

It's very sad to think about where this series could have gone. Every single book was a winner.

There is a Julian Kestrel short story out there. It's called The Lullaby Cheat and it's included in the book Crime Through Crime: http://www.goodreads.com/book/show/1216050.Crime_Through_Time

I hope to get my hands on it one day.

Interesting about the short story....I'll have to look that up. Thanks for the recommendation, Christy. I wonder where the short story fits into the chronology of the books?

As you know, I loved the first book, so I'm eager to continue with the series, such a shame she died of cancer! Such a talent!

Joanne, I have a friend who's read the short story, and she said it's not really made clear when the story takes place. However, it does at least take place after book #2, she says.

You've got my interest in this series now!! I love your blog because you always introduce me to a new author on a weekly basis!! Thanks!!

Christy -- I couldn't resist looking up the short story anthology -- found it used at Amazon for pennies...I'll be glad to share it with you and pass it along when I receive it and read through it.

Staci -- Thanks so much Staci; I hope you give the series a try as it is such sharp, smart writing.