Jane and the Canterbury Tale by Stephanie Barron 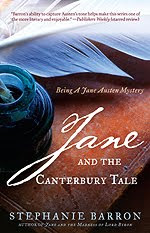 New Stephanie Barron book to be released August 28, 2011 in the Jane Austen Mystery series.....Jane and the Canterbury Tale.

"Three years ago, after a night of reckless gaming, Curzon Fiske fled England for an uncertain future in India, leaving scandal and prodigious debts behind him. When news of his death from fever in Ceylon reached his raven-haired wife, Adelaide, she mourned him for a time—then quietly restored her damaged reputation.

Now Adelaide is at the altar again, her groom a soldier on the Marquis of Wellington's staff. The prospects seem bright for one of the most notorious women in Kent—until Jane Austen discovers a corpse on the ancient Pilgrim's Way that runs through her brother Edward's estate. Why is the dead stranger dressed as a pilgrim, and who wrote the summons he carries in his pocket? Who is the aristocrat masquerading as a sailor? And why will none of Adelaide's friends reveal Curzon Fiske's final wager, the night he abandoned his wife? As Chief Magistrate for Canterbury, Edward is forced to investigate, with Jane as his unwilling assistant. From the shooting parties and balls of her wellborn neighbors, to the grim and airless cells of Canterbury gaol, Jane leaves no stone unturned. When a second corpse appears beside the ancient Pilgrim's Way, Jane has no choice but to confront a murderer...lest the next corpse be her own."

I need to get the first one read in this series!!

I'm enjoying the series, but I have read it out of order and that's ok -- even though I've only read the first three and her last release in 2010, Im going to read this one when it is available.