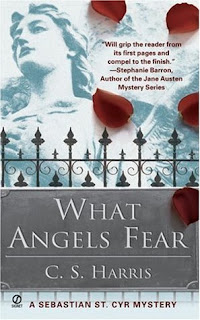 "In London, 1811, a young woman is brutally raped and murdered, her body left on the altar steps of an ancient church. The prime suspect: Sebastian St. Cyr, a brilliant young nobleman still haunted by his experiences in the Napoleonic Wars. Now he is running for his life, desperate to catch the killer and prove his innocence. Moving from Mayfair's glittering ballrooms to St. Giles's fetid back alleys, Sebastian is assisted by a band of unlikely allies and pursued by a Machiavellian powerbroker with ties to the Prince Regent himself. What Angels Fear seamlessly weaves an intimate knowledge of the period with a multi-layered and compelling story, and is the first of a series of novels featuring these characters."
(from Goodreads)

A very well-written historical mystery featuring the handsome Sebastian St. Cyr, Viscount Devlin, being accused of a heinous crime. Evidence at the scene of the rape/murder of a beautiful young actress implicates him as the culprit. During his arrest, he escapes and becomes a fugitive of the law while donning several disguises to disappear into the seedy underworld of Regency-era London searching for the real killer. Aided by a young street-wise pickpocketer, the duo set out to prove Sebastian's innocence and uncover a sinister plot of blackmail, love affairs, political intrigue, and spies. So impressed were the magistrates with Sebastian's investigative skills that they recruit him to assist them (unofficially, of course) in future cases!

I enjoyed this fast-moving plot as it kept me guessing how it would all play out. Some graphic descriptions of the murder and sex crime may be a bit much for some readers, so be forewarned. I'm definitely interested in continuing the series as there are several intriguing layers to Sebastian's character that should have interesting possibilities. In the author's note, Harris describes a condition (later called Bithil Syndrome) which gives Sebastian an abnormally keen eyesight and hearing, even the ability to have "night vision," as well as unusually quick reflexes. Pretty good qualities to have if you are an investigator!

This sounds very intriguing, Joanne. I'm adding it to my TBR List. Enjoyed reading your review. I always do, even if I might not always leave a comment. :)

So do you think Miss Jarvis will be a possible romantic interest in future books? I liked this book, but I read it so close to another similar one that I got the mysteries kind of mixed up. I need to space them out better.

Thanks for the review. I've heard very good things about this series and do have this one sitting on my shelf. Yet another book I'll have to make a point of reading during 2012.

Julie - I think you're right.....the door seems open for Miss Jarvis to get a bigger role in the future. Even though she had a tiny part, I liked her and there's all kinds of possibilities.

Melissa - I hope you enjoy it. It reminded me of the Julian Kestrel mystery series by Kate Ross. Unfortunately, Ross passed away and left an amazing series unfinished. The Sebastian St. Cyr series has a great list to dive into.

I like historical and I like thriller type books- and mysteries- so this really has everything I would like. Definitely a book I should look into.

Anjuli - I like thrillers within a historical setting and this fits the bill. Solid research and period details. Let me know if you try the series.

Oh, glad you liked this one! It's been sitting on my shelf for quite a while, and as soon as I finish with Marcus Didius Falco, I plan to use Sebastian as my historical mystery fix.

I have had this book sitting by my bed for at least a couple of years. I always hear lots of good things about it but just can't actually seem to get around to reading it!

Hi Aarti and Marg - I'm glad I gave it a try and there is a nice long list to dive into when I'm in the mood for a new historical mystery.

I need to get back to this series -- I really enjoyed this book!