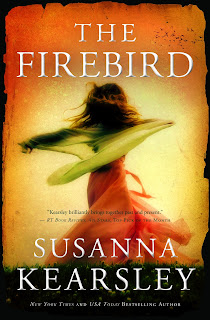 I cannot begin to tell you how excited I am to be a part of Susanna Kearsley's celebration of the Sourcebook's US release of her latest, The Firebird.

I had the opportunity to ask Susanna about any topic of my choice, so I immediately wanted to know if she would write about a part of her novels that I find so intriguing: that touch of the paranormal that seamlessly blends her stories from the past to the present. Each of her novels has a unique paranormal element, so I hope you enjoy the following guest post written by Susanna Kearsley for Books, Belles, and Beaux!

People who have read my books before will know I often like to link the past and present with a touch of something paranormal. In Mariana, for example, my heroine was the reincarnation of a woman who’d lived a few centuries earlier; The Shadowy Horses featured the ghost of a Roman legionary soldier; Named of the Dragon relied upon dreams, and The Winter Sea’s two storylines were tied together by genetic memory (which is properly more science than pure paranormal, I suppose).

The Firebird, true to form, has as its modern-day hero and heroine two people who both have psychic abilities.

Why do I do this? I’m not really sure, but I think my own interest in things paranormal goes back to the two books of fairytales that I loved best in my childhood (and which are both still on my shelves). One was shorter but larger with rich illustrations that drew me right in to the stories. The other was thicker with no illustrations at all, but with so many fairytales I’d never heard before, all of them having one thing to connect them—they took place in worlds where the strange and the magical lived side by side with the everyday.

In fairytales, the hero might be walking in an ordinary woods and meet an ordinary-looking man or woman who turned out to be not what they seemed to be at all. The laws of time and distance could be bent and altered. Nearly anything could happen.

As a child, I loved that world. And as I’ve grown, I’ve found myself intrigued by concepts like the Celtic view of time as something that’s not linear, but sideways—past and present moving side by side, with fleeting points of intersection. I like knowing there are some things that our current state of science can’t explain.

And I am fascinated by the scientific research going on today involving some of those same things: the research being done at the University of Wisconsin’s School of Medicine into whether genetic memory might explain the talents of autistic savants, for example, or the research into reincarnation and near-death experiences being conducted by the University of Virginia’s School of Medicine, whose Division of Perceptual Sciences holds as its guiding words a quote by Thomas Jefferson from 1812: "I was bold in the pursuit of knowledge, never fearing to follow truth and reason to whatever results they led."

Usually, when I am making my heroine come face to face with fantastical things in a novel, I like to make her the most sceptical character. Because, let’s face it—if I started to have visions of a past life, or to time travel, my first reaction would probably not be, “Oh, goody!” I’d probably think just the opposite, be convinced something was medically wrong, and rush off to my doctor.
In most of my books, then, the heroine doesn’t believe, to begin with. I have to convince her by stages, with evidence, and in so doing I hope that the reader is also convinced in the end.

But with The Firebird, I couldn’t use this method, because Nicola—the heroine—is psychic to begin with, so she doesn’t need convincing. Which is new for me, and nervewracking, because it means that readers have to trust her from the first page, the first sentence, and believe such things are possible—that certain people truly can communicate from mind to mind, and do the things that scientific research seems to show they can, but that our science cannot yet explain or fully understand.
It’s a lot to ask of readers, and I realize that not all of them will want to make that leap, including those who for religious reasons don’t believe in psychics (though I hope they’ll still read and enjoy the historical storyline).

But for those prepared to follow Rob and Nicola from that first line: “He sent his mind in search of me that morning”, I hope you find The Firebird—a book that takes its title from a fairytale—a journey through that world that I so loved in my own childhood, when the unexplained was interwoven with the everyday, and nearly anything could happen.

I would like to thank Beth Pehlke of Sourcebooks for including me in The Firebird promotion, and the author, Susanna Kearsley, for taking the time to write a personal guest post for Books, Belles, and Beaux.
Posted by Joanne at 1:12 PM

Thank you for a wonderful post. One book still on my TBR!

Thanks for your post and sharing your interview question. Susanna Kearsley's response was very interesting. I just purchased this book and will display it on my blog's Mailbox Monday's post. I am now following your blog because. at quick glance, I see we have some common interests.

Hope you enjoy it, Mystica!

Welcome, Pat! I'll be stopping by your blog for a visit, too.

Fabulous guest post. I've read all of Susanna Kearsley's novels with the exception of The Firebird. My favourites are Mariana and The Shadowy Horses. I loved the paranormal elements included in both books.

Genetic memory is a fascinating subject. I loved The Shadowy Horses, and I'm looking forward to reading all her books!

I was absolutely pulled into the genetic memory theory and would love to read more about that research!! She's such an amazing author and I can't wait to read this one which I will be starting this week!!!

I love Susanna's writing and have read most of her books. I'm just getting started good with The Firebird. I meant to save it for vacation, but I just couldn't. Now I'm mentally pushing back her characters so I can get my own writing done. At least during work hours. Which, given the proclivities of Nicola and Robbie, seems rather in keeping with the theme.