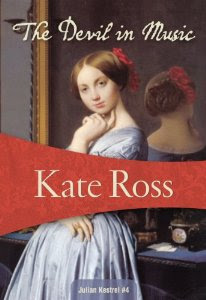 Woo hoo! The fourth and (unfortunately) the last of the excellent Julian Kestrel mystery series, The Devil in Music, will be released in August by Felony and Mayhem Publishers!

The four books that comprise the series feature Regency dandy and detective, Julian Kestrel, and his sidekick, Dipper, as they become involved in solving crimes from country house murders to the underworld of London.  The writing is sharp and intelligent,the attention to period detail is impeccable,  and the plots have many twists and turns that keep me flying through the pages! I love, love, love this Regency mystery series and am so glad the books are getting a fresh new look and a reprint. (My used copies purchased at various online sites are battered and falling apart.)

Traveling on the Continent with his ex-pickpocket valet, Kestrel finds himself caught up in the mysterious and murderous world of the opera. Four years ago, the Italian marquis Ludovico Malvezzi was murdered, and Orfeo, the young English tenor he had been training for a career on the glittering operatic stage, disappeared. As Kestral is irresistibly drawn into the baffling case, he encounters suspects at every turn: a runaway wife and her male soprano lover; a liberal nobleman at odds with Italy's Austrian overlords; a mocking Frenchman with perfect pitch; a beautiful, clever widow who haunts Kestrel's dreams; and the missing Orfeo, the penniless protege who just might be a political agent. And when the killer strikes again, Kestrel's quest for answers spirals into a crescendo of passion, danger, and music as he risks becoming a ruthless murderer's next victim


Do you have a favorite  historical mystery series?

Your post has reminded me that I must try the Julian Kestral series. I have the first book sitting on my shelf (I think I picked it up after you mentioned the series in another post).

Thanks for the recs, Melissa. I've not heard of the Sister Fidelma series, so I'm going to go look that up.