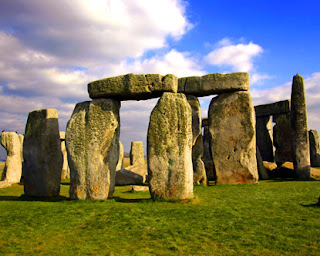 "Why, it's a henge!" I said, delighted. "A miniature henge!"...There were no signs of burial in the miniature henge atop the hill. By miniature, I mean only that the circle of standing stones was smaller than Stonehenge; each stone was twice my own height, and massive in proportion..."


"The tallest stone of the circle was cleft, with a vertical split dividing the two massive peices. Oddly, the pieces had been drawn apart by some means. Though you could see the facing surfaces matched, they were separated by a gap of two or three feet.

There was a deep humming noise coming from somewhere near at hand. I thought there might be a beehive lodged in some crevice of the rock, and placed a hand on the stone in order to lean into the cleft.

One of the most intriguing aspects of the Outlander books is the Circle of Stones, or Craigh na Dun, as the Scottish highlanders call it. We learn early on that the stones are a passage through time and are responsible for Claire's disappearance in the twentieth century. As the plot unfolds, we gradually learn more and more about the secrets of the standing stones.

Why did the stone scream? Looks like you'll have to read Outlander to find out the answer to that question!
Posted by Joanne at 9:00 PM

I have had the Outlander series sitting around forever! Someday I really need to read it. :-)

A few weeks ago I was just asking my b.i.l. who just got back from Britain, what stone henge was all about -- he didn't know. Guess I will have to read the book!

Lezlie -- treat yourself soon to Outlander and let me know what you think!

Hi, Kim -- I learned from reading the books that there are miniature stone henges in many places of the world, not just England. Who knew?

I'm on book 2 of the Outlander series. About half way through it. I am in love. Not just with the amazingly passionate and gorgeous Jamie, but with all of the characters. It's like you form a relationship with them. And I love every page :)

Lesley - You have many adventures ahead in the Outlander series with so many books yet to read! It is an amazing experience. Enjoy!