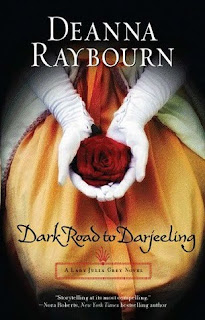 "After eight idyllic months in the Mediterranean, Lady Julia Grey and her detective husband are ready to put their investigative talents to work once more. At the urging of Julia's eccentric family, they hurry to India to aid an old friend, the newly widowed Jane Cavendish. Living on the Cavendish tea plantation with the remnants of her husband's family, Jane is consumed with the impending birth of her child--and with discovering the truth about her husband's death. Was he murdered for his estate? And if he was, could Jane and her unborn child be next?

Amid the lush foothills of the Himalayas, dark deeds are buried and malicious thoughts flourish. The Brisbanes uncover secrets and scandal, illicit affairs and twisted legacies. In this remote and exotic place, exploration is perilous and discovery, deadly, The danger is palpable and, if they are not careful, Julia and Nicholas will not live to celebrate their first anniversary."
(from the publisher)

What an amazing read -- witty and snappy dialogue, an exotic setting, a cast of eccentric characters involved in a web of mystery and intrigue -- everything that I have come to expect (and more) from one of my favorite authors!

Having read and loved the previous three Lady Julia Grey books, I was concerned that the relationship between the charismatic/enigmatic Brisbane and Lady Julia might lose its edge since they were now a married couple. So much of the interest in the books for me was the maddening tension of will they/won't they, and they walked that very fine line between restrained passion and loathing. No worries here, though, as Raybourn deftly manages to keep the sparks flying as Brisbane and Lady Julia are challenged trying to find a balance in their new marriage (time together to love, work together, but also time apart - Brisbane routinely does a disappearing act, much to his wife's annoyance). Their love and commitment is deep and obvious, but it's evident that there are still issues to work on in their relationship. Realistic!

Raybourn keeps the surprises coming in this whodunit mystery -- the death of the heir to the Peacocks, a tea plantation in Sikkim, is suspicious -- was he murdered, and who would likely profit from his death? Everyone from his pregnant wife (Portia's ex-lover) to assorted servants, neighbors, and family members are under suspicion, and Lady Julia, confident in her detecting abilities, along with her sister, Portia, and brother, Plum, attempts to discover the truth (she desperately wants to one-up Brisbane). While Julia begins methodically seeking information around the village to establish a possible motive, Brisbane manages to constantly infuriate Lady Julia by staying one step ahead of her. The list of possible suspects is a mile long, and have no fear, Raybourn pulls a few new tricks out of her hat that left me saying, "I didn't see THAT coming!"

Lots of trademark sarcastic wit, quirky characters, and some truly poignant moments made Dark Road to Darjeeling a memorable experience. I laughed, I cried, and I'm left anticipating their next adventure back in England!

Great review! I loved the first 3 Julia Grey books and this one is near the top of my TBR pile.

Raybourn doesn't disappoint, Ruth-- I hope you enjoy it!