The Temptation of the Night Jasmine by Lauren Willig

"After years abroad, Robert, Duke of Dovedale, has returned to England to avenge the murder of his mentor. To uncover the murderer's identity, he must infiltrate the infamous secret Hellfire Club. But the Duke has no idea that an even more difficult challenge awaits him -- in a mistaken, romantic-minded young lady.

Charlotte Lansdowne wistfully remembers the Robert of her childhood as a valiant hero among men. Too aware of his own flaws, Robert tries to dissuade Charlotte from her delusions, even as he finds himself drawn to her. When Charlotte takes up a bit of espionage--investigating a plot to kidnap the King--Robert soon realizes that she is more than the perfect partner in crime.

Caught in a dangerous game full of deadly spies and secret rites, Robert and Charlotte must work together to reveal the villain....and confront their true love."

I've slowed up a bit with Willig's Pink Carnation series as I don't like whipping through a series and then being left with a long wait for the next installment. Fortunately, there's still plenty of adventures ahead with The Betrayal of the Blood Lily, The Mischief of the Mistletoe, and the January 2011 release of The Orchid Affair.

While Night Jasmine is classic Willig style -- the juxtaposition of the exploits of the historical characters and the modern day relationship of Eloise and Colin -- I didn't find the storyline of Charlotte and Robert, the Duke of Dovedale, as intriguing as some of the previous characters. Since Charlotte is a quiet, bookish young innocent, and Robert was noble and honorable, their relationship was very sweet and chaste, similar to a fairytale with references to a knight on a white horse sweeping the princess off her feet and disappearing into the future with unicorns and jam tarts. Very sweet -- their innocent kiss was a stark contrast to the illicit activities of the Hellfire Club, which, by the way, I thought was one the more interesting aspects of the book. Using the Hellfire Club as a cover for a plot against the king was the most compelling part of the story.

Meanwhile, back in the present, things between Eloise and Colin are finally moving forward as little by little the reader learns a bit more of Colin's background and career, and the couple finally seem to have made some progress on the romantic front, as well. (You have to read carefully, but I assume by "...we fell asleep in a happy haze of red wine and extra-connubial canoodling" that they have indeed become much more than just friends. ;)

Although I enjoyed the previous novels in the series much more, I still marvel at Lauren Willig's turn of a phrase and literary references sprinkled throughout her stories. I always learn something new from her books or feel compelled to look up a literature reference that is part of her storyline. In this case, I was intrigued by Charlotte's beloved Evelina novel, and don't you know, I had to check online and it's available in both paperback and e-book! (I wonder what Charlotte would think of a kindle?!) The book, titled Evelina: The History of a Young Lady's Entrance into the World, was written by Fanny Burney and was very popular back in the day. (I had to order myself a copy!) Click here to read more about "the mother of English fiction" and more of her writings. 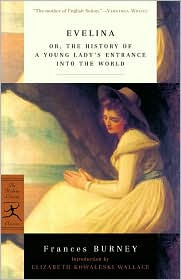 Good review, I felt very much the same way you did. I liked the whole plot with the King and the Hellfire part too, but as for Charlotte and Robert, their romance was lacklustre. Charlotte just did nothing for me, I much preferred Harriet here and Robert was okay, but that fact he had to lie to her for the majority of the book irked me. I also wondered about Eloise and Colin - after such a huge build up with their first date, first kiss - and then - nothing about their first night together!

Hey, Julie -- Yep, I was surprised too that she glossed over their first night since readers had a five book wait! LOL!