Lately, I've been collecting books at an alarming rate! Too bad I'm not a speed reader as the growing TBR pile has reached gargantuan proportions, but I believe there is no such thing as too many books, and besides, I never know from day to day what reading mood I will be in -- I like to have choices at my fingertips.

I recently posted about my collection of Barbara Michaels gothic mystery novels that struck my fancy. Here's another series that I discovered that looks like it could be an interesting diversion. The cross-genre (mystery/romance/comedy) Maggie series by Kasey Michaels looks like fun -- what do you do if you are a writer of Regency romances and your dashing hero steps out of the pages of your novel and shows up in your NY apartment? (Doesn't the cover look like Fielding's Bridget Jones's Diary?) 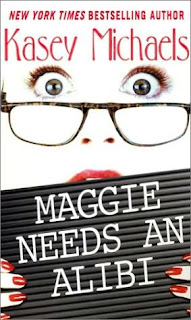 (editorial review from Publisher's Weekly)
"Prolific historical romance writer Michaels breaks into a new genre, thanks to an audacious premise with deliciously funny results. Maggie Kelly, midlist writer of historical romance, got dumped by her publisher when her sales figures didn't rise fast enough, so she reinvented herself as a mystery writer. Making use of her historical background, she created a Regency aristocrat-detective, Alexandre Blake, Viscount Saint Just, giving him an endearing, bumbling sidekick, Sterling Balder. Having quickly become a bestseller, Maggie is polishing up her latest when suddenly her two characters step out of her imagination and into her life. At first she thinks she's hallucinating, but she rapidly realizes that Saint Just and Balder really have come to life. It's one thing to write about the adventures of a gorgeous, arrogant and condescending hero; it's another entirely to have to live day to day with the man himself. When Maggie's former lover and current publisher, Kirk Toland, dies after eating a dinner Maggie prepared for him, Maggie is the chief suspect in a very nasty murder mystery for which she can't write the ending. Predictably, Saint Just insists on playing hero and trying to solve the murder, while Maggie tries to keep anyone from figuring out who (and what) he really is. Michaels handles it all with great aplomb, gaily satirizing the current state of publishing, slowly building the romantic tension between Maggie and her frustratingly real hero, and providing plenty of laughs for the reader." 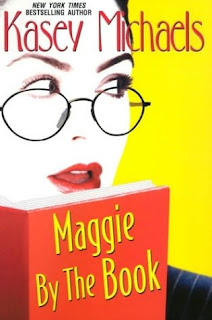 (editorial review from Publisher's Weekly)
"Romance and cozy fans will welcome this cross-genre sequel to Michaels's Maggie Needs an Alibi (2002), with its original premise, sympathetic if reluctant heroine and lively supporting cast. New Yorker Maggie Kelly, a former author of Regency romances who now writes historical mysteries, has an unusual house guest, her fictional Regency-era hero, Alexandre Blake, Viscount Saint Just (aka Alex Blakely). What's more, he has registered her for the annual conference in Manhattan of We Are Romance (WAR), a romance writers' group with whom she's had past differences. Maggie grudgingly attends and fronts Alex and his friend, Mary Louise, in the cover-model contest. Tensions run high, and participants head for home as a series of increasingly dangerous pranks culminates in the death of one of WAR's most notorious members. Alex, a sleuth in his own fictional world, is determined to unmask the killer at the fancy dress ball, with or without the help of his creator, who's distracted by the reappearance of her NYPD detective heartthrob, Steve Wendell. Michaels, a romance writer herself and a pro at juxtaposing unlikely characters, keeps the sparks flying between Maggie and Alex, who serves as an admirable foil for her irritation. A surfeit of amusing secondary characters slows the action in the middle, but the plot picks up at the end with the unmasking of the surprise culprit." 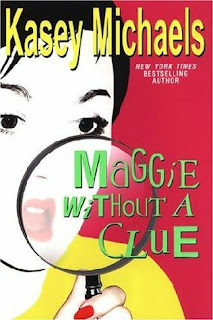 (editorial review from Publisher's Weekly)
"Romance bestseller Michaels delivers more fantasy and fun in her third witty, well-plotted cozy (after 2003's Maggie by the Book) to feature Maggie Kelly, a former author of historical romances who now writes historical mysteries. When Maggie's editor, Bernice Toland-James, awakens in bed to find herself covered in blood and next to the dead body of her ex-husband, Benny, whom she assumed drowned almost seven years before, she phones Maggie in hysterics. Accompanied by her own fictional creation—Alex Blake, Viscount Saint Just, the tall, handsome, astute and somewhat arrogant Regency detective—Maggie rushes to the rescue. Having two quirky characters, Saint Just and his sidekick Sterling Balder, enter the real world and help Maggie solve mysteries lends an amusing metafictional twist to the series. Meanwhile, somebody breaks in and ransacks Saint Just and Sterling's newly sublet apartment. Further complications ensue as Maggie tries to balance her attraction to Saint Just with her relationship with NYPD Lieutenant Steve Wendell, while Saint Just discovers feelings and thoughts not written into his original character. A surprising conclusion will leave readers wanting more."

Thank you for bringing this to my attention. It's going on the list!

Hi, Kim! You're Welcome! I'm always on the lookout for books with a unique premise, and these just look like fun. They're a bit hard to find, though -- I found mine on e-bay. Enjoy!