Bride of the MacHugh by Jan Cox Speas

"This is the story of Elspeth Lamond and the MacHugh.

Elspeth is a provocative and feminine lass who lived in a turbulent time in Scotland’s history, a period crowded with romance, intrigue, battles and characters that are memorable for their vitality and charm, their lust, strength and willfulness. Alexander MacHugh was head of one of Scotland’s mightiest clans when the rebellious Highlanders rallied around the MacDonald banner. He was a man of massive will but gravely courteous demeanor, and he clashed with Elspeth at every encounter, his will pitted against hers, neither of them willing to surrender to an irresistible attraction.

It was early in the seventeenth century in Scotland, and the men and women who lived, loved and fought then were no less stormy and unpredictable than the violent events which caught them up and determined their fates. In these pages you will meet the corrupt and ambitious Earl of Argyll, Elspeth’s wily guardian, who epitomizes an insatiable greed for power and wealth; Kate MacLaughlan, the beautiful and treacherous redhead, whose passion for Alexander MacHugh would stop at nothing for fulfillment; Gavin, the grim and mysterious youth with a scar across his cheek; Elspeth’s half-sister, Jeanie Lamond, as fair and fresh as a May morning, and of course, the many brave and gallant Scottish rebels, led by the MacDonalds, who harried the Campbells and would not be subdued by England.

It seemed just another day when Elspeth Lamond rode into the wild and untameable hills and moors of the Highlands on a quiet mission from London, but within a few hours she was a captive riding in the rain toward an unknown destination. From the day of her abduction by a band of rough horsemen till the day she fled the thick walls of her guardian’s castle, Elspeth’s fate was irrevocably linked with the Lamonds and with their friend, the MacHugh, whose name reverberates through these pages with the vigor of a clash of arms."
(from the original 1954 publication)

What a rare gem! This tale originally published in 1954 had everything I like in a book...warring Scottish clans, intrigue, adventure, deceit, secrets, a larger-than-life Laird, the MacHugh, and the courageous Elspeth.

Elspeth is Scottish by birth but is being raised in England as a ward of King James. She makes a promise on her mother's death to travel to Scotland to meet her father, Robert Lamond, whom she's never known. She arrives is Scotland under the protection of her guardian, the powerful Earl of Argyll. Her arrival quickly takes a turn when she is abducted and set on an unknown journey...

I enjoyed the author's vivid descriptions of the cold and rugged Scottish lands, the castles and battlements, and the myriad of interesting historical details that proved Ms. Speas had the gift to make you experience events as if you are "right there." Fans of Susanna Kearsley's writing will feel right at home with Jan Cox Speas' books...there is romance, but it's subtle and discreet, set within the context of an historical setting and political intrigue.

I mentioned in a previous post that Sourcebooks will be reissuing three of the books by Jan Cox Speas, which is great; my concern is that the covers may be sending the wrong message. To me, (and this is strictly my opinion) they give the impression that the story is heavy on romance, and that is only a part of the story. I hope readers who enjoy historical fiction will give these reissued books a chance.

The original 1954 cover of Bride of the Machugh: 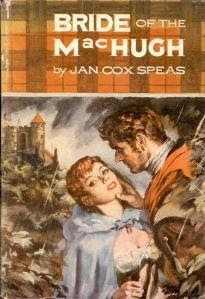 Sourcebooks 2011 edition of Bride of the MacHugh: 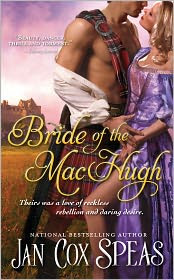 I'm very much looking forward to reading My Love, My Enemy and My Lord Monleigh.

I've had this book on my TBR for a long time, and intend to move it up now. I have the one with your same cover (from the '70's - it looks it!) They're hard to come by, glad to hear Sourcebooks is re-releasing them!

I must read as much Scottish books as I can this year - did I mention I'm planning a trip to the Highlands in August?!?!?!?

What???!! That's fantastic news! I know it will be an experience of a lifetime. Can't wait to hear all about it. Just you and the hubby? Your son, too? Cathy?

I'm glad your review is positive, because to be honest I would never otherwise purchase this book based on the new cover. It sounds very good though, so I'm definitely going to give it a try.

Yes, Avid Reader, I know exactly what you mean. The Bride of MacHugh is very similar in style and content to Kearsley's books, which I would not classify as strictly romance.

All three of us are going! I just booked our lodgings, I am so excited! Hubbub, the kid, we'll have to drag there kicking and screaming and me!

Thanks for this, a friend at Goodreads just read this as well and I was planning on hunting it down soon. That new cover does it no favors, does it?

Hi, Misfit -- You're right...a different cover might give it a broader audience. The cover gives the impression that it is a sizzling romance, and the truth is that this book originally written in 1954 has very subtle romance passages.

This is one of my all-time favorites. I can re-read it practically every day if I had the time. And it's probably the only book I've ever read where the cover matches the characters. Neither of these are the cover I bought 40 years ago (and still have, yes, it's falling apart). It depicts the characters perfectly and will show up on Google images, the dark-haired brooding and glorious Alexander on the left, holding close the small, lovely Elspeth. Sigh.