Margaret Mitchell and John Marsh: The Love Story Behind Gone With the Wind by Marianne Walker 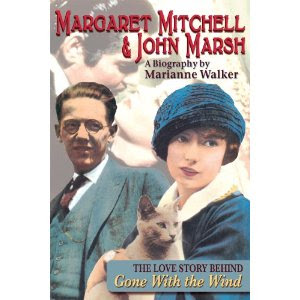 "The marriage of Margaret Mitchell and John Marsh was more than one of great love and deep friendship; it was a lucky literary match, both for them and for a world made richer by the creation of GONE WITH THE WIND.

Based on almost 200 previously unpublished letters and extensive interviews with their closests associates, Walker's biography of Margaret Mitchell and her husband, John Marsh, offers a new look into a devoted marriage and fascinating partnership that ultimately created a Pulitzer Prize-winning novel. This edition of Walker's critically acclaimed biography celebrates the seventy-fifth anniversary of the publication of GONE WITH THE WIND in 1936."

It's been seventy-five years since Margaret Mitchell's phenomenal novel of the Old South took the world by storm, and Gone With the Wind to this day remains a beloved favorite of countless readers. It is certainly one of my personal favorites, and I am always interested to read about the background of the creation of both the novel and the blockbuster movie. What many may not know is that the love story behind the creation of GWTW is just as fascinating as that of the fictional love triangle of Scarlett O'Hara, Ashley Wilkes, and Rhett Butler.

In Margaret Mitchell & John Marsh: The Love Story Behind Gone With the Wind,
Marianne Walker, through interviews and extensive research, has written a fascinating portrait of Margaret ("Peggy") Mitchell that indeed seems to reflect many of the same facets of Scarlett O'Hara's fiesty and sparkling personality.

As a young southern debutante, Peggy enjoyed being the center of attention -- a pretty and pert flirt, she had no shortage of handsome young men to escort her to a never-ending round of parties and dances. Not very interested in school or studies but very much interested in being a writer, she could often be found at places where artists, writers, and others interested in a creative life frequented.

When she met the tall, quiet John Marsh in 1921, they became very close friends and shared an interest in books and writing. Marsh was a serious man who worked incredibly hard as a respected journalist, and he fell deeply in love with the vivacious and fun-loving Peggy. He knew she dated many other men and was very popular, but their friendship was very strong and deep and he believed one day they would be married. Peggy often found herself at odds with her social-conscious family over her impulsive and improper behavior, and the icing on the cake was when she shocked everyone by marrying "Red" Upshaw, a dashing and handsome bootlegger with a scandalous reputation!

I mention this background material of the book as it is important to see how the seeds of Gone With the Wind may have begun in Peggy's own experiences. Walker's biography continues to reveal how Margaret Mitchell and John Marsh finally, (as destiny must have planned all along) got together and became utterly devoted and supportive of each other.

Although Peggy worked as a reporter in Atlanta for a time, she was often sick in bed or in pain from numerous maladies, and her enforced bedrest gave her time to work on a story of the Old South that had been germinating in her mind. She had a keen interest in southern history and was entertained since birth with tales of the Confederacy. To quote her,

"I spent the Sunday afternoons of my childhood sitting on the bony knees of
Confederate Veterans and the fat slick laps of old ladies who survived the
war and reconstruction." p. 24

Her manuscript, which had no title up until the time of publication, was the couple's "baby." For years, Peggy worked on her manuscript, researched extensively, traveled to Civil War sites, and worked tirelessly to get her historical facts completely accurate. In the evenings when her husband returned home, they sat together and reviewed her writing of the day. The writing was deeply personal to them, and they did not share the manuscript with anyone -- indeed, it seemed as if her novel was a very intimate part of their relationship, and it's a wonder the world ever had a chance to see it. Peggy suffered from bouts of depression and insecurities, and she referred to her work as

"...just that old dog-eared and dirty bunch of copy paper which took up
so much space in our small apartment and seemed with each rewriting
to get worse." p. 289

Thankfully, a publisher did get to see this "dirty bunch of copy paper" as it eventually became a Pulitzer Prize winning novel! It is clear, though, in Walker's biography, that without the help and support of her beloved and devoted husband, Gone With the Wind might never have been completed.

Marianne Walker's meticulously researched biography is a richly detailed look at a complex love story every bit as compelling as the characters in GWTW.
Recommended for all GWTW fans, with many black and white photos and excerpts from personal letters included.

For more information about the book and Marianne Walker, visit Peachtree Publishers.

***Thank you to Samantha Grefe and Peachtree Publishers for sending me a copy of Margaret Mitchell and John Marsh: The Love Story Behind Gone With the Wind by Marianne Walker for review. I was not compensated for this review, and the thoughts expressed are my personal opinion.***
Posted by Joanne at 12:00 PM

Labels: Margaret Mitchell and John Marsh: The Love Story Behind Gone With the Wind, Marianne Walker, Read in 2011

Oh my- now I have to read this!!!! Your blog is going to be the death of me...I've already have too many books I'm attempting to finish :)

Definitely must put this on my list of 'have to read' books!!

Oh awesome! I had no idea that this existed. I live in Margaret Mitchell Land (Hello, Atlanta!) so this is super appealing. Fun stuff. :O)

I'm starting to feel overwhelmed, very time I turn around I see reviews of books that I must add to my TBR List. But I'm doing my best to read what I've just brought home from the library and what's just arrived in the mail or what have you. How is this supposed to work? I ask you? :)

Add me to the contest, please. I would love to win this book.