"In the breathtaking tradition of The Last of the Mohicans....

MacKinnon's Rangers - They were a band of brothers, their loyalty to one another forged by hardship and battle, the bond between these Highland warriors, rugged colonials, and fierce Native Americans stronger even than blood ties.

Though forced to fight for the hated British, Morgan MacKinnon would no more betray the men he leads than slit his own throat--not even when he was captured by the French and threatened with an agonizing death by fire at the hands of their Abenaki allies. Only the look of innocent longing in the eyes of a convent-bred French lass could make him question his vow to escape and return to the Rangers. And soon the sweet passion he awoke in Amalie had him cursing the war that forced him to choose between upholding his honor and pledging himself to the woman he loves."
(from the publisher)

Another terrific adventure and passionate love story from Pamela Clare! I was blown away at how compelling Surrender was (book #1), and I've been looking forward to continuing this series of the three MacKinnon brothers, exiled Scottish Highlanders forced to serve in the British army during the French and Indian War. Book #2, Untamed, was more great storytelling, and the long-awaited story of the third brother, Connor, will be published (Feb. 2012) to complete the trilogy. The title is Defiant, and I can't wait!

As a huge fan of Diana Gabaldon, I often have discussions with other Outlander readers about books that might be similar. We're all on a quest to find books "like the Outlander series" because nothing seems to compare to Gabaldon's fabulous books and we want more! Well, while I've yet to find anything that comes even close to Gabaldon's series, I think it's safe to say that people who enjoyed Gabaldon's Drums of Autumn and The Fiery Cross might also enjoy Pamela Clare's MacKinnon trilogy (there's no time travel). She's a great storyteller with a talent for recreating the raw, edgy danger of the wilderness, and of course, creating fabulous heroes who love with a fierce passion.

The MacKinnon brothers are fierce Scottish warriors, deeply loyal and proud of their clan heritage, and received Mahican training to survive in the harsh wilderness.

"They were Clan, bound not by the blood in their veins, but the blood they'd lost and spilled together."

In Untamed, we learn Morgan's story where he is gravely injured and captured in a skirmish with the French army outside of Fort Carillon (Ticonderoga). Part adventure story, part passionate romance (sex scenes are HOT!), this story of Morgan and Amalie Chauvenet, (a sheltered and convent-bred daughter of a French officer) is one of love, secrets, and betrayals, and the reader follows them on their journey as they overcome conflicting loyalties and danger to find their happiness.


BTW, Pamela Clare has a new publisher and will be re-releasing the trilogy with material that was left out of the original books, and the cover art is going in an entirely different direction. Here's a look at the new art for Book #1, Surrender. 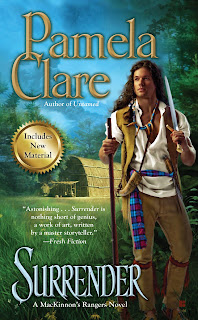 Surrender and Untamed are both enthusiastically recommended! Be on the lookout for the upcoming re-releases.

I'm so on board for this one. I love Gabaldon's books and reading anything that would help put me back there in that setting is a good thing. Plus, I'm loving that cover!

Staci - I'm just sorry she is finishing the MacKinnon stories with only three books. I'd love to read more historicals from Pamela Clare. (She also writes contemporary thrillers, but I haven't tried those.) Can't wait to see what you think!