Today I would like to extend a warm  welcome to Anna Belfrage at my book blog! She is the author of the recently released historical fiction novel, Like Chaff in the Wind and  is currently touring with Historical Fiction Virtual Book Tours.  After reading her guest post here at Books, Belles and Beaux, please enter for a chance to win a copy of Like Chaff in the Wind. (International giveaway!)
THIS CONTEST IS NOW CLOSED -- THANK YOU.

Let me start by addressing a heartfelt ‘thank you’ to Joanne for being part of my blog tour and giving me the opportunity to post on her excellent and varied blog. This is the last of my guest posts on this tour, and should you be interested in reading my previous contributions why not visit Bippity Boppity Book , Oh, for the Hook of a Book! , Flashlight Commentary and Historical Fiction Connection .

This post is mainly going to be about food. (I think. My posts tend to live a life of their own at times. ) I am a food person. Don’t get me wrong, I’m a whole lot of other things person as well (mainly books & tea ) but food is definitely a top priority for me, which is probably why I find it so interesting to discover what people ate back then – you know, before the advent of basic joys such as ice cream and Feta cheese. 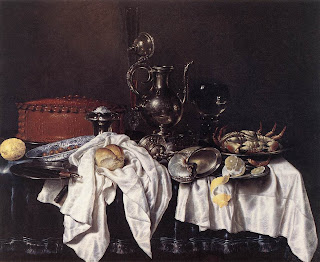 Still life by Willem Claeszoon Heda, depicting a feast most seventeenth people could but dream about.

As a child growing up in Latin America, I always found it strange when my parents sighed and spoke of food they were missing.
"Herring," my father would say. My mother would sigh and nod. Inevitably, this would lead to a long list of all the foodstuffs they missed, now that they were so far from home.

It's strange, how much of "home" is defined by food, isn’t it? Milk abroad never tastes like it does at home, neither does the bread or the cheese or the… The point I’m trying to make is that should you be yanked out of context, away from home, you'd definitely miss food! Ask Alex(andra) Graham, my rather reluctant (if by now reconciled) time traveller; she has a list as long as her arm of all the edible stuff she longs for.
And there you are, happy landing on a chocolate bar ... sang Shirley Temple, her face dimpling into a glittering smile. Except that if you're transported back to the seventeenth century (like Alex) you can forget about chocolate. Ha, says the well informed reader, chocolate originates from Mexico and had therefore already been "discovered" by the Europeans. Dear reader; I'd like to see you drink a mug or two of this chocolate drink without having your mouth shrivel into a desiccated raisin. Chocolate in the seventeenth century was very rare - even in Spain. And where it was used, it was prepared as a drink so bitter it would make modern day chocolate freaks weep. In general, anything with sugar in it was rare; sugar was a luxury commodity, so whatever comfort food the people of the seventeenth century resorted to in periods of angst it was probably far healthier than what we binge on today.
For the coffee and tea addicts among us, I have bad news. Coffee was a futuristic dream outside the larger cities and tea had only recently begun to make its way to Europe, this thanks to the Portuguese. Not until the Restoration would tea become a common beverage in England. 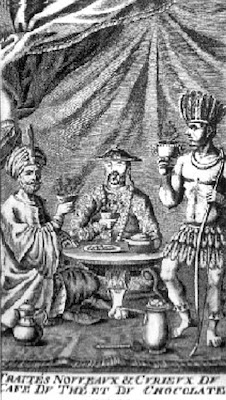 Coffee, tea and chocolate side by side, represented as exotic and new-fangled drinks. (Philippe Sylvestre Dufour)
But hey; most of us can live without chocolate, or coffee or tea. Absolutely (however depressing the thought) but how about a life without potatoes? Pasta? Pizza? Tomatoes? Oranges and bananas? Avocados - can anyone live without avocados? Once again, the well informed reader might protest; the Spaniards came upon both the tomato and the potato in South America back in the fifteenth century. Yes, they did, but for some strange reason these plants were often considered poisonous (to be fair, some members of the solanum family are poisonous) and not until the late eighteenth century was the potato to become a staple crop in Northern Europe.
So what did they eat then, these people that were deprived of so much of what we enjoy and like today? Was it all porridge and pea soup? The quick answer to that is ... YES. For the majority of the population, porridge was the cornerstone of their diet. And what was left over at one meal was reused in the next - or the day after. Yummy, yummy; cold, solidified porridge is just the thing to set your saliva flowing, right? This rather dull diet was complemented by bread, beer, the odd piece of smoked and salted meat or fish, eggs while the hens were laying, vegetables such as onions and carrots, turnips, cabbage and kale -  and even more beer. But mostly it was porridge. Very much porridge.
Alex has days when she daydreams about chocolate cake, about crisp French fries and juicy hamburgers. She closes her eyes and is whisked back into a reality containing salads and baguettes, antipasto from Italy and steaming Thai curries. She opens her eyes, and it’s back to porridge and rye bread, to an existence where cooking is a long, tedious process with not a tomato in sight. Does she mind? Of course she does, but given the choice between going back to her time or staying with Matthew, she would choose her man any time.
“Dead easy,” she says when I ask her. “I can live without tomatoes and bagels. I’d die without him.” Her eyes drift over to where her husband is busy with his horse. She laughs. “God; did I just say that? Makes me sound like quite the clinging little wife, doesn’t it?”
“Yupp.” I grin at her and she sticks her tongue out. Out in the yard Matthew laughs, and Alex whips round to look at him. Her entire body softens, the slightest of smiles tugging at her mouth.
“I guess I am,” she says in a voice so low I have to strain my ears to catch it. “He’s all I need, all I want, however hackneyed that might sound.” For some seconds she is sunk in contemplation, studying her man. His tall frame dips and turns as he unsaddles the horse, the low winter sun throwing elongated shadows that dance round man and beast. She calls his name and he turns, breaking out in a smile. Their eyes meet. He straightens up, places his hand over his heart and mouths her name. Blood rushes like wildfire up her neck, her cheeks. She throws me a look. “I’ve never thanked you, have I?”
“Not as such.” Mostly Alex has harangued me about my temerity in having her torn from her comfy modern day life to the far more primitive and dangerous existence in the seventeenth century. I clasp her hand – well, try to; the woman doesn’t exist except in my head.
“But you know, right? That not a day goes by without me giving thanks for him.” She leans against the doorpost, eyes stuck on her husband.
I just nod. “Now, back to this food thing…”
Alex laughs, a loud bubbly sound that has Matthew raising his head in our direction. “Not comfortable with the mushy stuff?” she teases.
“Not unless it’s mushy peas,” I mumble. “This post is supposed to be about food, okay?”

In Like Chaff in the Wind, Matthew Graham suffers the iniquities of being sold as a slave, which has anything but a positive impact on his diet. Porridge becomes gruel, meat a rare food group that mostly appears in the guise of salted pork, bread and other baked goods rarely grace the table, and fresh fruit … forget it! In combination with exacting days on a tobacco field, it quickly reduces him to a walking wreck, a shadow of his former self.
Alex, of course, has no choice but to go after him. She needs her man like fishes need water, like we all need air. He is the pillar of her existence, the rock of her life, and without him by her side she fears she will shrivel up and die, wafting away like an ephemeral dust cloud. And during her perilous journey to find her man, let me tell you there are plenty of days when she would have murdered for a Snickers bar – or a Big Mac. Instead, all she got was biscuits with weevils and – yupp, you’ve guessed it – porridge.
****************

The publisher has one paperback copy of Like Chaff in the Wind for my giveaway -- open internationally! For a chance to win, simply leave a comment with contact information.  (No contact information = no entry). One entry per person, please. Winner will be randomly selected and announced April 8, 2013.
Good Luck! 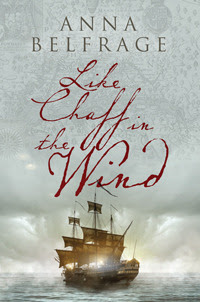 THIS CONTEST IS NOW CLOSED. THANK YOU.
Posted by Joanne at 12:30 AM

That was a fabulous post! enjoyed every minute of it.

Please count me in for the giveaway and thanks for making it open to all. Much appreciated.

Thank you for such an interesting and deeply facinating post, as a lover of historical fiction.

I would love to be entered for the book giveaway. My email address is : lfountain1(at)hotmail(dot)co(dot)uk
Thank you so much! x

I have read quite a bit about this book and would love it win a copy!

Thanks for the chance!

What an interesting post. I don't think I'd survive after knowing the foods of our time. :)But porridge all the time would guarantee I'd be thin. lol
I cannot wait to read these two books in the series. Love the excerpts.
Thanks for the chance.
Carol L
Lucky4750 (at) aol (dot) com

I would love to win this book, I have heard so much about it.
Thanks for the giveaway!

Really want to read this one. Love the cover. thanks.
nanze55(at)hotmail(dot)com

That was a great guest post! Thanks for writing it!

Thanks for the giveaway!

Thank you for the chance to win this book. I think it looks very good.

Glad you liked the post ladies, and yes, I do believe the 17th century diet would have kept me too very slim. Not sure I think it's worth it though!

Can't wait to read this one! Loved the interview, too!

This looks great! Thanks for the giveaway!

would love to be entered for this giveaway!!