The Firebird by Susanna Kearsley & Giveaway!

It's no secret here on this blog that Susanna Kearsley is one of my very favorite authors! Her writing is so rich and her characters are always memorable....her stories touch my heart. She combines history, romance, suspense, and time travel to perfection. My collection of Susanna Kearsley books are "keepers" and I look forward to reading them over and over again.

Today I am honored to be a part of Sourcebooks celebration of the upcoming release of The Firebird. I have an excerpt from The Firebird as well as a fantastic package of  Susanna Kearsley books for a GIVEAWAY!  (THIS CONTEST IS NOW CLOSED -- THANK YOU.) 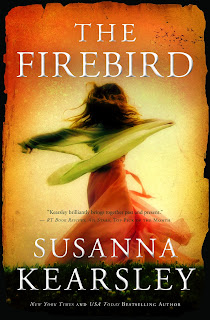 Giveaway!! (Open to the U.S. and Canada)

Sourcebooks is offering a prize package of the following four books -- shipping to the U.S. and Canada only. These four happen to be my absolute favorite Susanna Kearsley books! I know many of  my followers already love these books and have them in their personal library. That's okay -- take a chance to win and share them with your friends! Simply leave a comment with contact information and one lucky winner will be randomly chosen and announced on April 23, 2013. Good Luck!

I've only read The Shadowy Horses, and I absolutely loved it! Awesome giveaway!

Wonderful giveaway which I would enjoy greatly. Many thanks. saubleb(at)gmail(dot)com

What a great giveaway! Susanna Kearsley is one of my favorite authors.

I absolutely LOVE Susanna Kearsley as well! Thank you so much for having this giveaway!!
Tiff
kohlert(at)mail(dot)gvsu(dot)edu

Oh thanks for hosting this contest! ruthellenanderson (at) gmail (dot) com

I love Susanna kearsley! She's fantastic. Mariana is one of my favorites and I wish I owned it! Thanks for the giveaway.

Susanna Kearsley is my favorite author! I would love to own these four books (as well as the other "hard to find" books).
Pick me! Pick me!

Susanna has quickly become my favorite author too. I want to read this book.

I love Susanna Kearsley, and would love this collection! lilahupa@hotmail.com

Susanna Kearsley is one of my favorite authors!

I love this peak at the young Anna and can't wait to read the rest of her story in The Firebird.

Thanks for the giveaway! Beautiful covers!

Susanna Kearsley is one of those authors that I've heard nothing but good things about but have yet to read one of her books (so many books, so little time and all that). This would give me the perfect opportunity to read several of her books!

I haven't started reading Susanna Kearseley yet, but all these books are on my TBR list. I've heard such great things about her writing. Thanks for this giveaway opportunity!
s.asher135(at)gmail(dot)com

Woohoo! Can't wait to read this next one! And would love to win these 4 books for my very own!

I have this one and so can not wait to read it!!!

First time visitor - directed to your blog by Susanna's post on Facebook :-) Thanks for the chance to win these books. She's a great writer.

Uh-mah-zing giveaway! I've somehow never (yet!) read a Kearsley novel, but am dying to -- I see nothing but raves for her books. Thanks for the amazing giveaway!

What an amazing giveaway. I have not read any Kearsley but she comes highly recommended. I just purchased The Winter Sea. I love your book collage at the bottom of your blog, so many great books. Thanks for the chance to win more Kearsley titles!

What a fantastic giveaway! The Winter Sea is my favorite Kearsley book, so far!