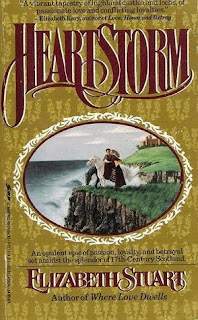 An opulent epic of passion, loyalty, and betrayal set amidst the splendor of 17th-century Scotland.

Sweeping from the wild Scottish Highlands to tapestried castle halls, from court revelries to battlefields, from the unstoppable desire for power to the unquenchable hungers of the heart--they struggled passionately toward a triumphant destiny.

Robert Randall - The cruel and powerful Earl of Glenkennon, sworn to bring English rule to the untamed  Scottish countryside...

Sir Francis MacLean - The rough-hewn cheiftain of a Highland clan, pledged to protect his people...

Anne Randall - A ravishing young woman trapped between the ties of blood and the the ties of love, her heart sworn to the man her father has vowed to kill...

This turned out to be a really well-written Scottish historical romance! For me, there's something about an older paperback that appeals to me...I'm drawn more and more to historicals and romances written many years ago, and I stumbled upon this little gem in a used paperback pile.

Upon the death of her mother,  young Anne Randall is being escorted to live with her estranged father, the treacherous Earl of Glenkennon. Glenkennon has imprisoned members of the MacLean clan, and the daring laird, Francis MacLean, abducts the earl's daughter during her journey with the intent to use her as a pawn. While Anne is kept as a hostage at Camereigh, the clan castle, the two develop a growing relationship that both know can only end in heartache......she is English and the daughter of MacLean's sworn enemy; he is a Scottish rogue and an outlaw who will be hunted to the death by Glenkennon. How can the star-crossed lovers find peace and fulfillment with each other when all odds are against them?

Very interesting historical details and engaging writing style -- I just ordered a few more of Elizabeth Stuart's novels I enjoyed Heartstorm so much. (Without Honor, Where Love Dwells, and Bride of the Lion.)

I love that you're talking about an older book! This sounds like something right up my alley!!! Loved the review!