The Missing Manuscript of Jane Austen by Syrie James 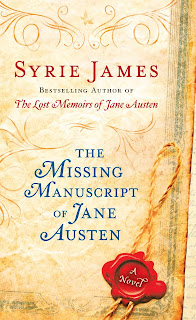 
"The minute I saw the letter, I knew it was hers.

There was no mistaking it: the salutation, the tiny, precise handwriting, the date, the content itself, all confirmed its ancient status and authorship…

Samantha McDonough cannot believe her eyes--or her luck. Tucked in an uncut page of a two-hundred-year old poetry book is a letter she believes was written by Jane Austen, mentioning with regret a manuscript that "went missing at Greenbriar in Devonshire."

Could there really be an undiscovered Jane Austen novel waiting to be found? Could anyone resist the temptation to go looking for it?"

I started reading this book on January 1st, and I have to say it was a charming way to start off my new year.

I actually spent New Year's in Vail, Colorado, so while the snow swirled outside and the temperature dropped to -10 degrees (!), I curled up in the condo with a roaring fire, a cup of hot chocolate, and my kindle version of The Missing Manuscript of Jane Austen by Syrie James. It was delightful to get lost in the make-believe world of "what if".....wouldn't it be wonderful if someone discovered a secret letter and hidden manuscript written by Jane Austen?

The story takes off quickly right from the start, and soon we are treated to a "novel within a novel." When librarian and Austen expert Samantha McDonough finds an incredible artifact hidden inside an old book, she begins a quest that will take her to a grand old home in Devonshire that just might have as it's claim to fame as a place where the one and only Jane Austen visited in her younger years.

The present owner and heir of Greenbriar, Anthony Whitaker, is intrigued but skeptical when Samantha approaches him with the possibility of an amazing historical and literary connection to his home. A Jane  Austen connection to his ancestral home would certainly have financial possibilities, so Anthony agrees to help Samantha begin her search of the home for clues. When a hidden manuscript is found, the pair begin to read the story that the world has yet to see......

Here we are treated to Syrie James' fleshing out authentic notes from Jane Austen (Plan of a Novel) into her version of a seventh Austen novel. True to Austen's style and wit,  Syrie created The Stanhopes, an authentic-sounding story that could very well have been written by a young Austen.

However.....is it authentic? Who has the right to actually own this manuscript? Should the world have access to it as a published novel......or should it go to the highest private bidder at auction? Hmmmmm, many dilemmas and possibilities present themselves -- both personally and professionally -- that makes this a very interesting read.  Austen fans will be buzzing about this one -- a real treat for Janeites!

*This book is from my personal library.

This was the last book I read in 2012, and I also really enjoyed it. It was a great way to end my reading year.

First off, a fire, hot cocoa, and a book sounds like the perfect winter evening!

As for the book, this does sound like something I'd enjoy, even though I haven't read any Jane Austin. (Unheard of, I know.) But it does sound like a great book to kick off the new year.

I really enjoyed this one too =)

Here is my review.
Have a great reading week!

I'm sitting in front of a fire while it snows outside right now! I've seen several reviews of this book and all have been great. I need to find a copy!
2 Kids and Tired Books

It sounds like you had a lovely New Year's! This book is on my TBR pile, I'm really looking forward to it!

Just got this one last night from Net Galley! Can't wait to read it!!

I'm reading this one right now and am absolutely loving it!!!!