The Secret Diary of Anne Boleyn by Robin Maxwell 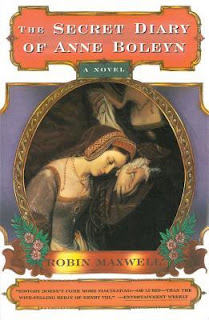 In this "energetic" (Kirkus Reviews) re-creation of Anne Boleyn's tragic life -- and death -- Robin Maxwell offers a pitch-perfect version of a bawdy and exuberant time filled with lust, betrayal, love, and murder.

When the young Queen Elizabeth I is entrusted with Anne Boleyn's secret diary, she discovers a great deal about the much-maligned mother she never knew. And on learning the truth about her lascivious and despotic father, Henry VIII, she vows never to relinquish control to any man. But this avowal doesn't prevent Elizabeth from pursuing a torrid love affair with her horsemaster, Robin Dudley -- described with near-shocking candor -- as too are Anne's graphic trysts with a very persistent and lustful Henry. Blending a historian's attention to accuracy with a novelist's artful rendering, Maxwell weaves compelling descriptions of court life and devastating portraits of actual people into her naughty, page-turning tale. The result is a masterpiece of historical fiction -- so prophetic of our time that one would think it were ripped from today's headlines. (from back cover)
My Thoughts:
I'm hitting my TBR pile very hard this year, so it's quite possible to see many books that were all the rage quite some time ago just making an appearance on my blog. I'm determined to get to books that have been languishing on my shelf for three or more years, and this was one of them! I happen to love the Tudor period and never seem to tire of the tale of "the great matter" or the lustful life of Henry VIII and his parade of wives.
I was first intrigued with The Secret Diary of Anne Boleyn a few years ago because I thought it would be a unique experience to read passages in a diary written by the doomed queen.....but in the last few years, we've seen an over abundance of "secret diaries," "missing manuscripts," "hidden letters," and "lost memoirs" on the literary scene,  haven't we? It might be time to put that plot device aside for a while.

The story alternates between the time of the beginning of Elizabeth's reign  and the diary entries written by Anne (beginning in January of 1522 and ending with the days before her death). The diary is Anne's legacy for her daughter and a way of expressing her thoughts and opinions in a time when no woman dared to exert her  independence in a man's world.  Through the words of the diary, the reader comes to know the many facets of Anne's life, as a daughter, an object of desire by the King of England, a wife, a mother, and a much-maligned figure. We all know the chain of events that will lead to her demise, but what comes across as particularly poignant in the words of Anne Boleyn are her feelings for her daughter and her desire to protect and teach her the hard lessons in life. Anne knows she will not live to see her daughter grow up, so in a last desperate act to reach out to her daughter to let her know of her mother's love, she writes in the last entry in her diary,

"My darling Elizabeth,
When last I laid my eyes upon your sweet self you were not yet three years old. More
beautiful than a painted doll you were....Perhaps you have no memory of those early years
but I can truly say, Elizabeth that tho our times together were sadly few, you knew me and
you loved me. ..I so cherished those rare, enchanted hours and hope you have some memory of them, because I must die knowing I leave you a motherless child in a cruel and dangerous
world....

I had a few quibbles with the historical facts (for example, too many references to Anne's sixth finger and witch's mark on her neck) and a great deal of artistic license with Elizabeth's private life which made me rate this book 3 stars. Fun for Tudor enthusiasts, but definitely as  much fiction as fact.

A new edition of the book is being published with this cover: 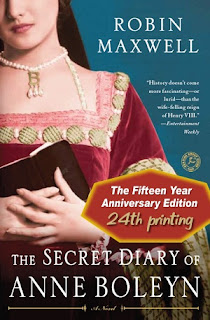 *This book is from my personal library.

Thanks for the honest review, Joanne. I love the new cover but since I prefer historically accurate historical fiction this one likely isn't for me.

Thanks, Melissa. I couldn't help but compare it to Margaret George's The Autobiography of Henry VIII (With notes from his fool Will) -- Margaret George is someone I trust for more accurate information within the context of fiction.

Great review, Joanne. I'm always back and forth about Maxwell's books -- for every one I like, there's one I can't stand. I think this was a DNF for me from long ago. Thanks for being honest here!

Even though I do love this plot device, I can see how if it's not done well the book may seem unoriginal. Noting the 3 stars though. This year I'm adding 4+ stars to my list. I too am trying to get books off of my shelf too!!

Great post! I came across your blog while I was looking for Front Royal Rental Cabin and I really hope I can find a cabin similar to this one, it looks great. Thank you for sharing this with us!

This is one of the firs Robin Maxwell books I read. It's been a while since I read it, but I remember enjoying it. I do also remember their being somewhat of a sequel to it. One where Elizabeth had a baby and was able to hide it, The Queen's Bastard maybe?